I have written a three part series to create a youtube player. It used only React and heavily depends on callbacks from children to parent and in one case two level deep. We can solve this issue using three solutions — Flux, Redux , Context API. We will look into solving this with Flux in this tutorial.

We will first look briefly into what is Flux. Flux also follows the unidirectional flow of react, but it’s a closed circle. It have four parts — The React components, Actions, dispatcher and Store

It either creates an action or listen for a change in store or do both.

Just a middleman, sends actions to all stores

Manages the logic and emits the changes, to be picked up by components.

We only need three components in this Flux refactoring. The basic flow will be as below. We will understand it more, once we build it. 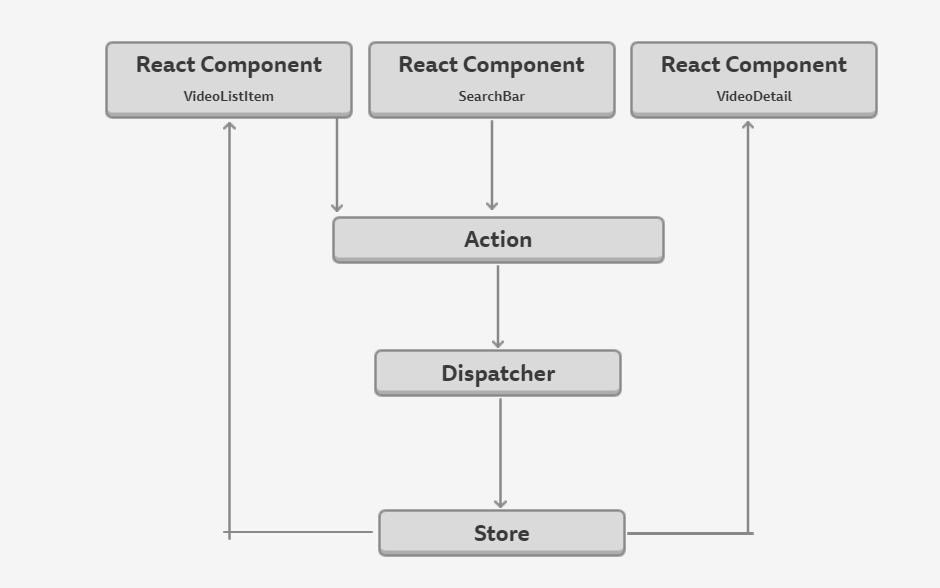 Now, i will be first cloning from the create youtube player repo. 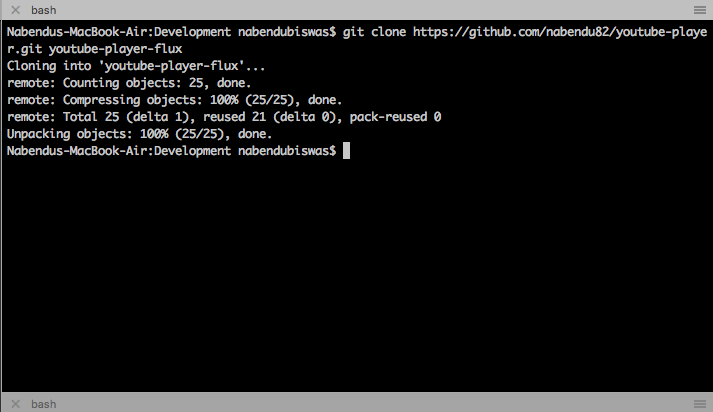 After that change to that directory and do a npm install.Once the npm install finishes successfully do a npm start 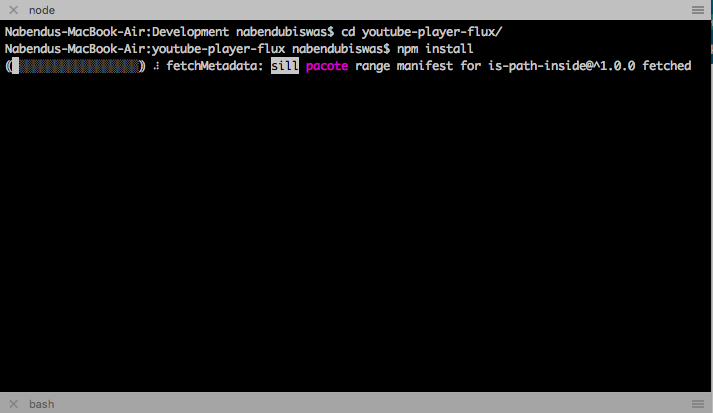 cd to directory and npm install, then npm start

In Flux and other central state logic implementations, we move much of the logic out of React. It only remains as a View, which it is meant to be.

Let install flux into our project by npm install — save flux

Now one of the main part of our youtube-player logic is to go the Async API call to youtube through youtube-search-api. We will move this logic out to our App.js to action file. We will first see the basic unidirectional flow of Flux by showing a initial search of ‘React Tutorials’. From the constructor, we the call to the action file function videoSearch(). We will create that next. 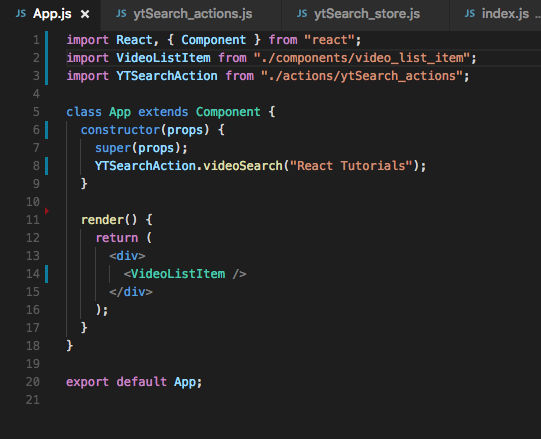 Now create an actions folder in src directory and a file ytSearch_actions.js inside it. This action file is doing the Async YTSearch now, with searchTearm(‘React Tutorials’ from App.js). It is receiving an array of object from youtube as a response. Then sending the same to dispatcher as an object with an identifier in actionType and the received data in payload.

Also, create a constants folder and an index.js file inside it. It is used here in actions(ActionTypes.FETCH_YTSEARCH) and also will be used in store. Basically used to keep the constants maintainable. 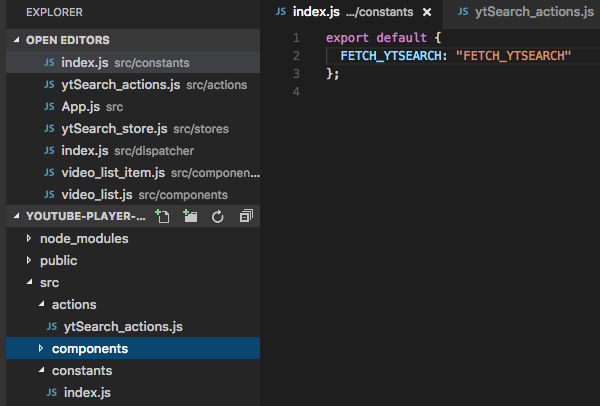 Now create a dispatcher folder and an index.js file inside it. It is just a simple file, with functionality written internally. It basically takes everything from the actions and passes it to all stores. 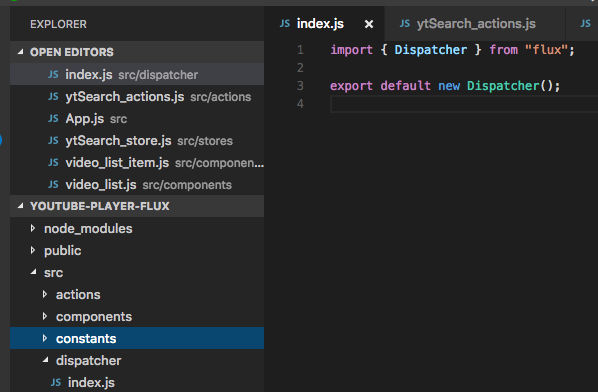 Now create a folder stores and a file ytSearch_store.js inside it. It contains the major functionality in a flux application. Here we are first importing an emitter. In the constructor, we first registering with the dispatcher as it’s gets it data from dispatcher.

Notice the action.payload is nothing but the data from ytSearch_actions.js file. So, it’s the array of object, we received from youtube. We then call the function _addNewSearchItem(), where we assign this array of object to a local array and EMITs it. The getAllVIdeos() returns the state of this local array, which we will use later in receiving component. The next two functions addChangeListener() and removeChangeListener() will also be used in our receiving component. 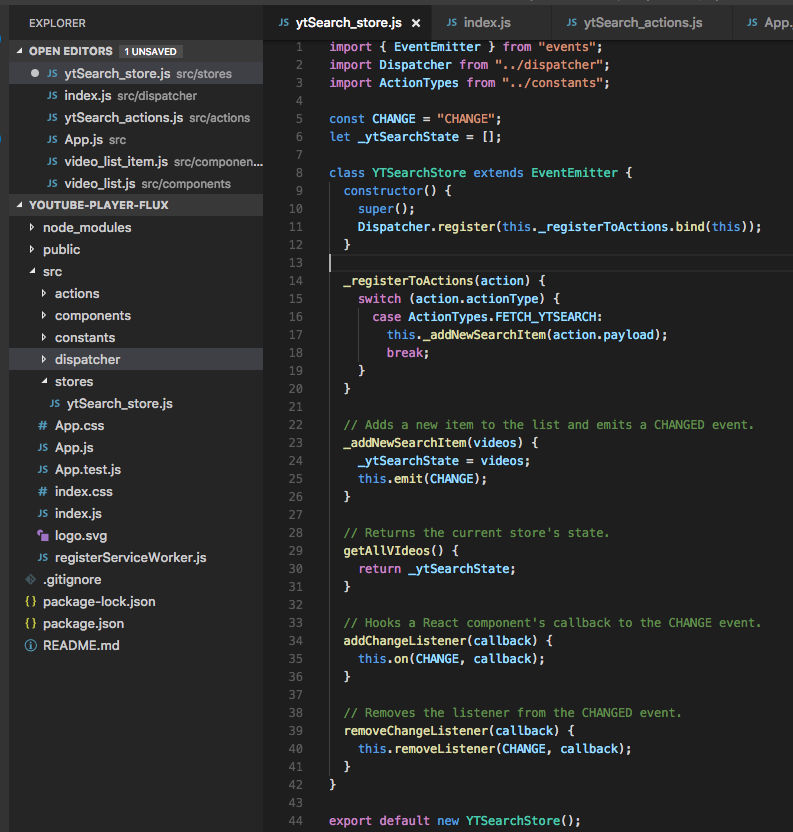 Now, we will update our receiving component video_list_item.js .Note, in this refactored flux youtube player, we don’t need the file video_list.js Here we are first importing the store. Creating a state object with items as key which calls YTSearchStore.getAllVIdeos() and gets the array of object. In constructor, a _onChange() function is also call. It sets the state variable once it receives the array of object.

This keeps on changing, once we do the search. There is react lifecycle hook componentWillMount() and componentWillUnmount(), which are used to addChangeListener() and removeChangeListener() from dispatcher. In render() method, we display the url and the title in a list through using map and iterating over. 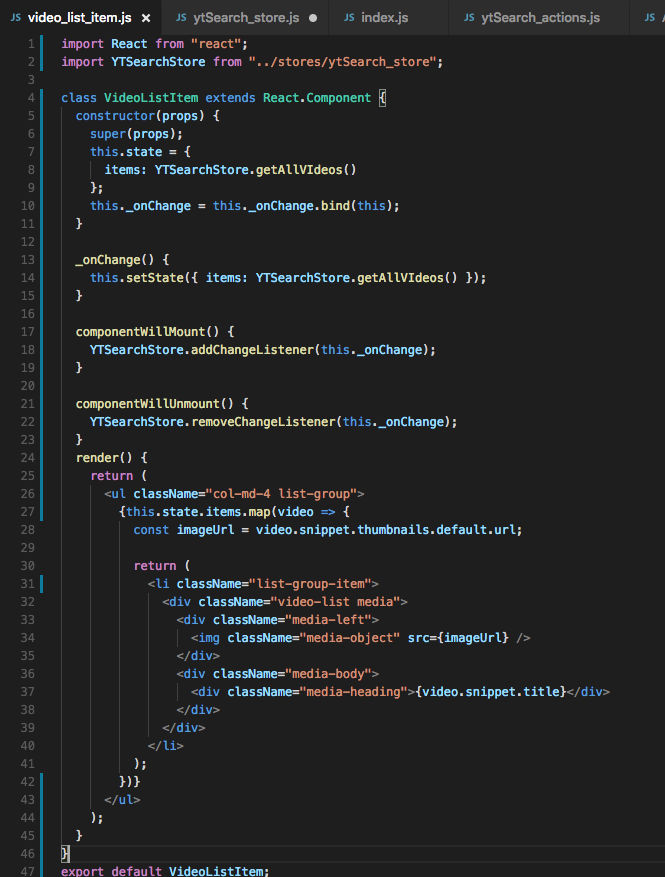 Our array of object, which we receive from youtube. 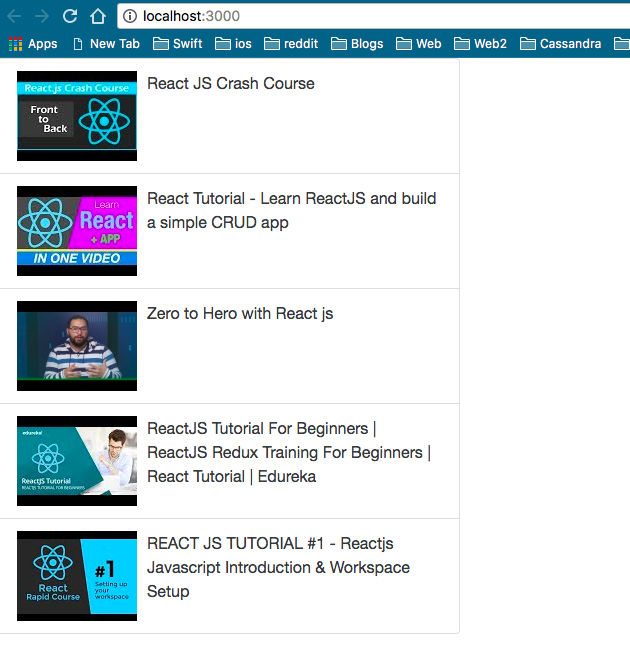