Welcome to part-7 of the series. We will learn about useReducer hook in this part.

It is mainly used for state management. The code and the logic is similar to reducers used in Redux.

We will learn with an example. So, go ahead and create a new react project with the below command.

We will implement an simple counter with useReducer hook. Create a new folder components inside src folder. Inside it create a file CounterOne.js and put the basic content in it.

The syntax of the reducer function, is exactly similar to the redux counterpart. Here, we are passing the state and action as parameters. Inside a switch statement, we are incrementing, decrementing or resetting the state. 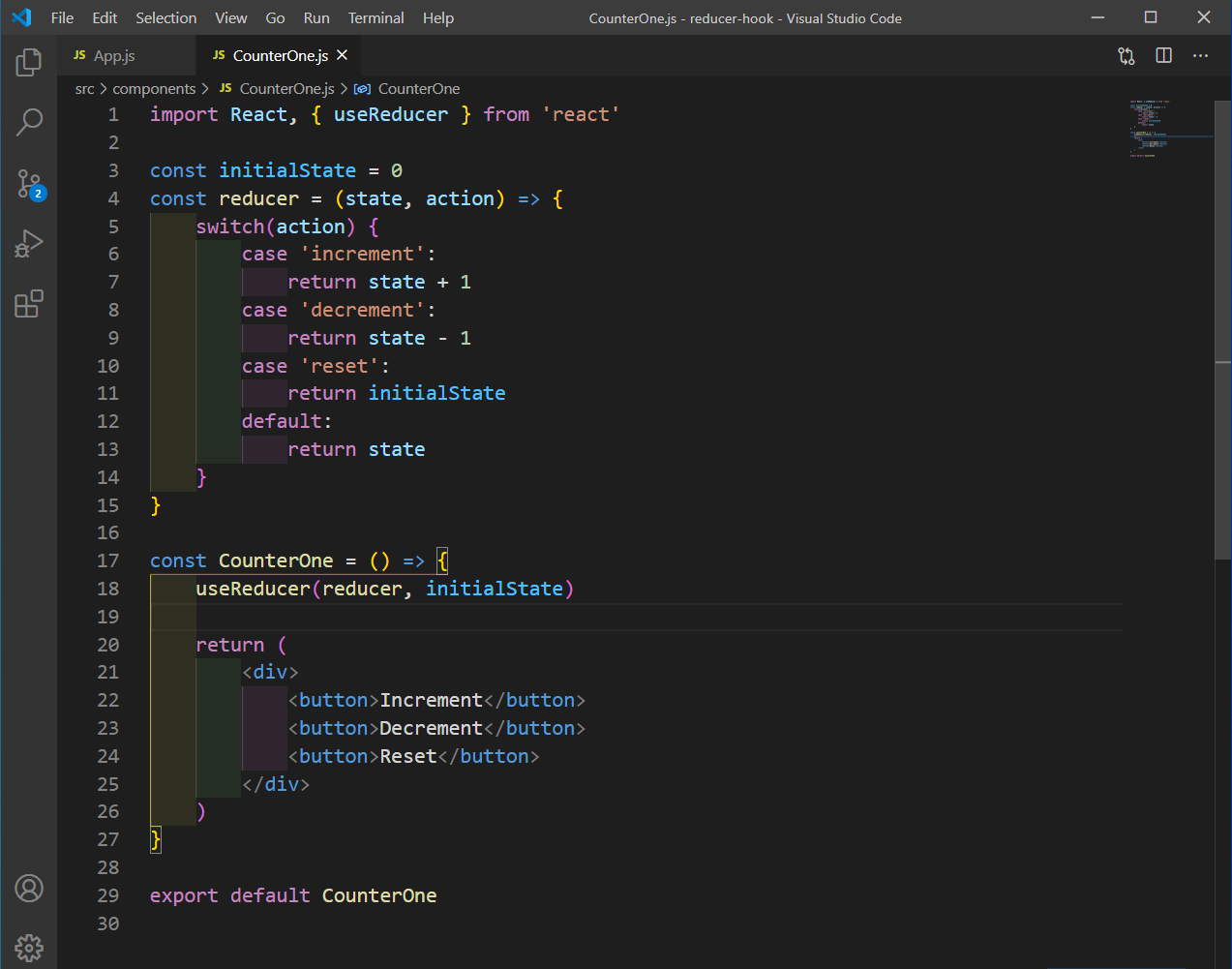 Similar, to useState the useReducer also returns a pair of values, which we can get hold of using array destructuring. We have a count and a dispatch method. This dispatch method allows us to execute the code corresponding to a particular action.

We are using the dispatch to send the action to the reducer function, with the respective value. 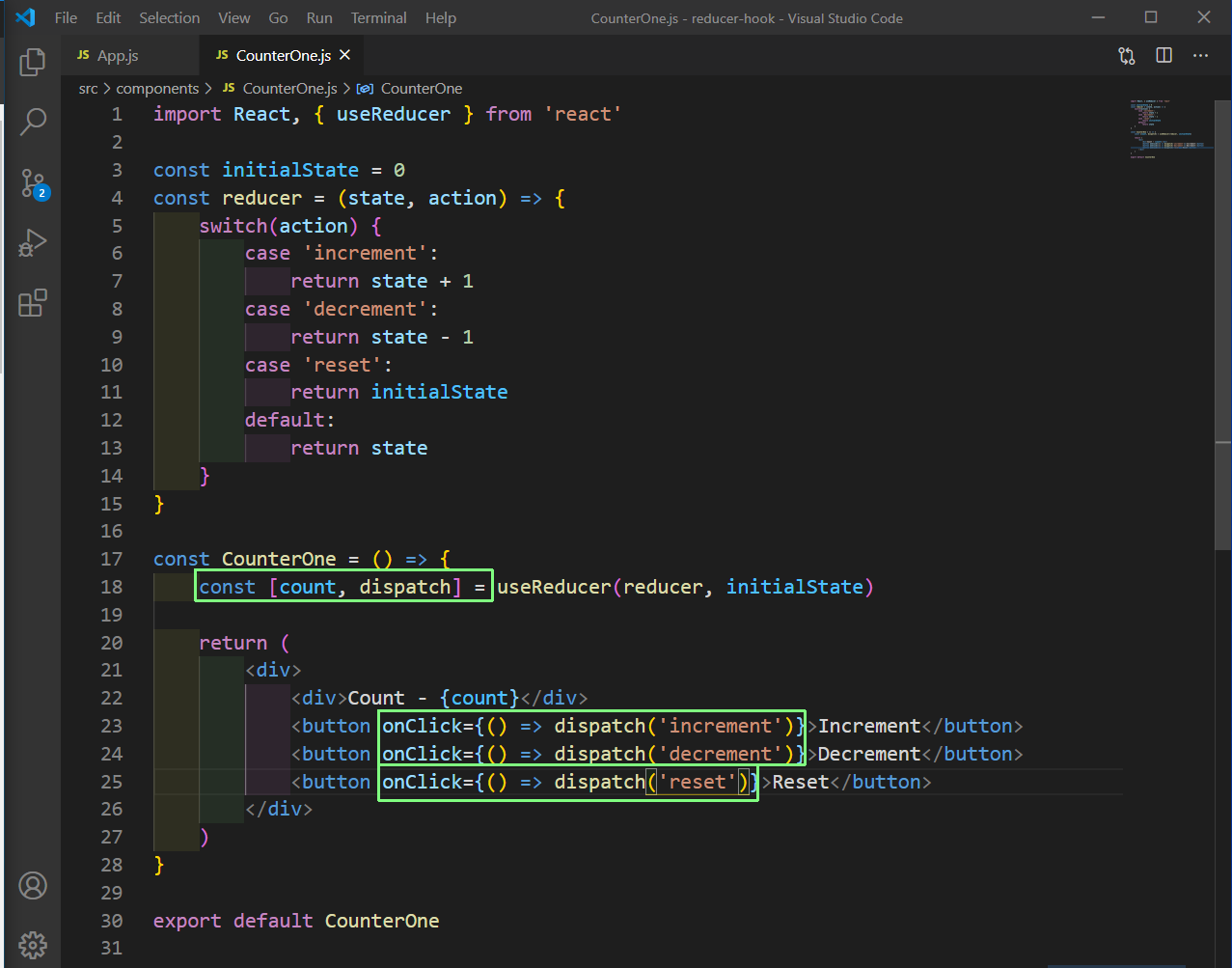 Now, we need to add the component CounterOne in App.js file.

Now, head over to localhost and the buttons works as expected.

We will implement the same counter with complex state and action, where both of them will be objects. So, it is quite similar to what we use in Redux.

Create a new file CounterTwo.js inside the components folder. It is almost similar to CounterOne.js, only the updated code is highlighted. We are basically changing both state and action to objects here. 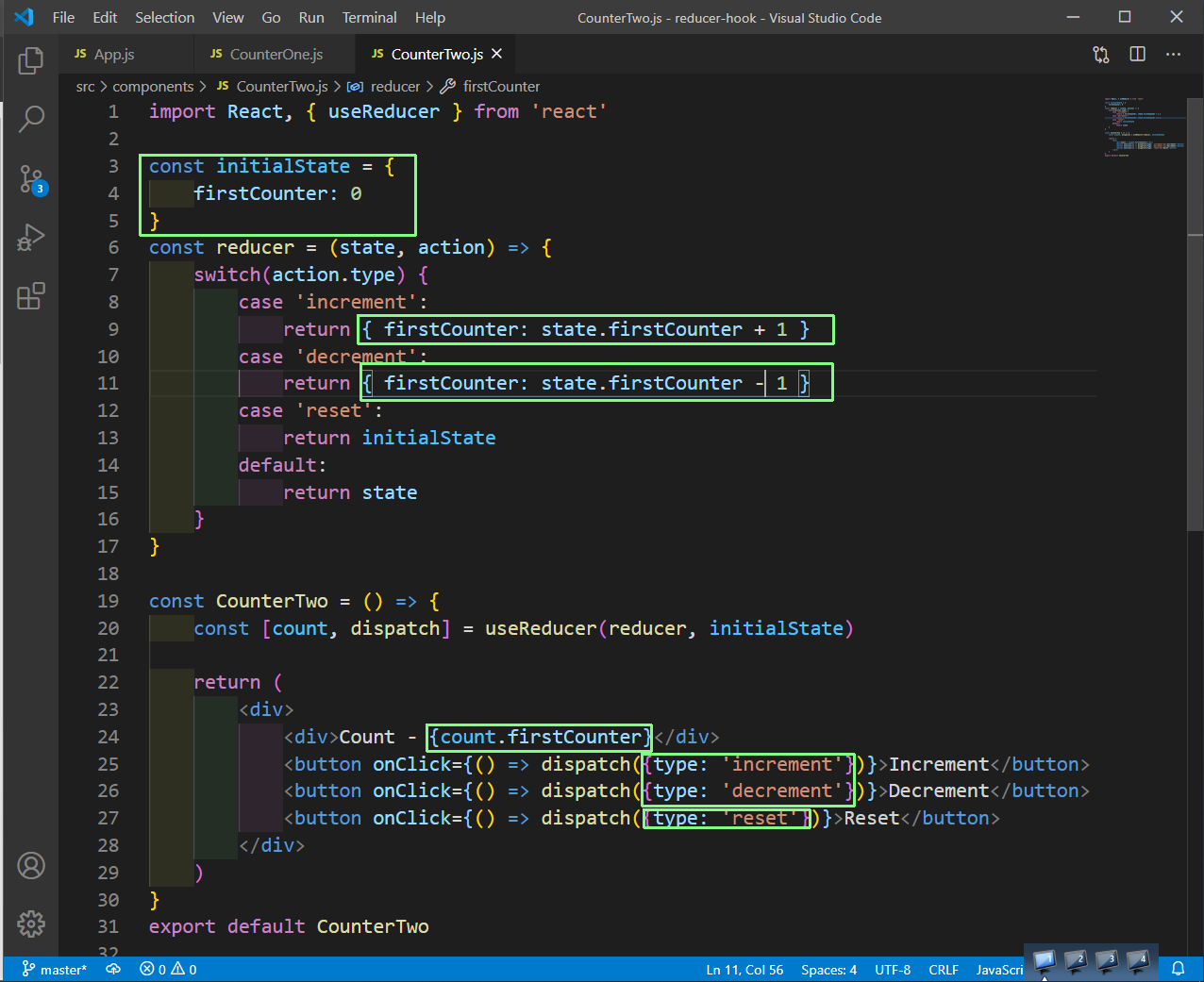 Now, include it in App.js and after that in localhost we will get the same output.

Now, the obvious question is the advantage of this pattern over the earlier pattern.

The first case which we will look on is to have a value action to increment or decrement with any value. So, we have a value key in the action object. We are creating two new buttons for the same. 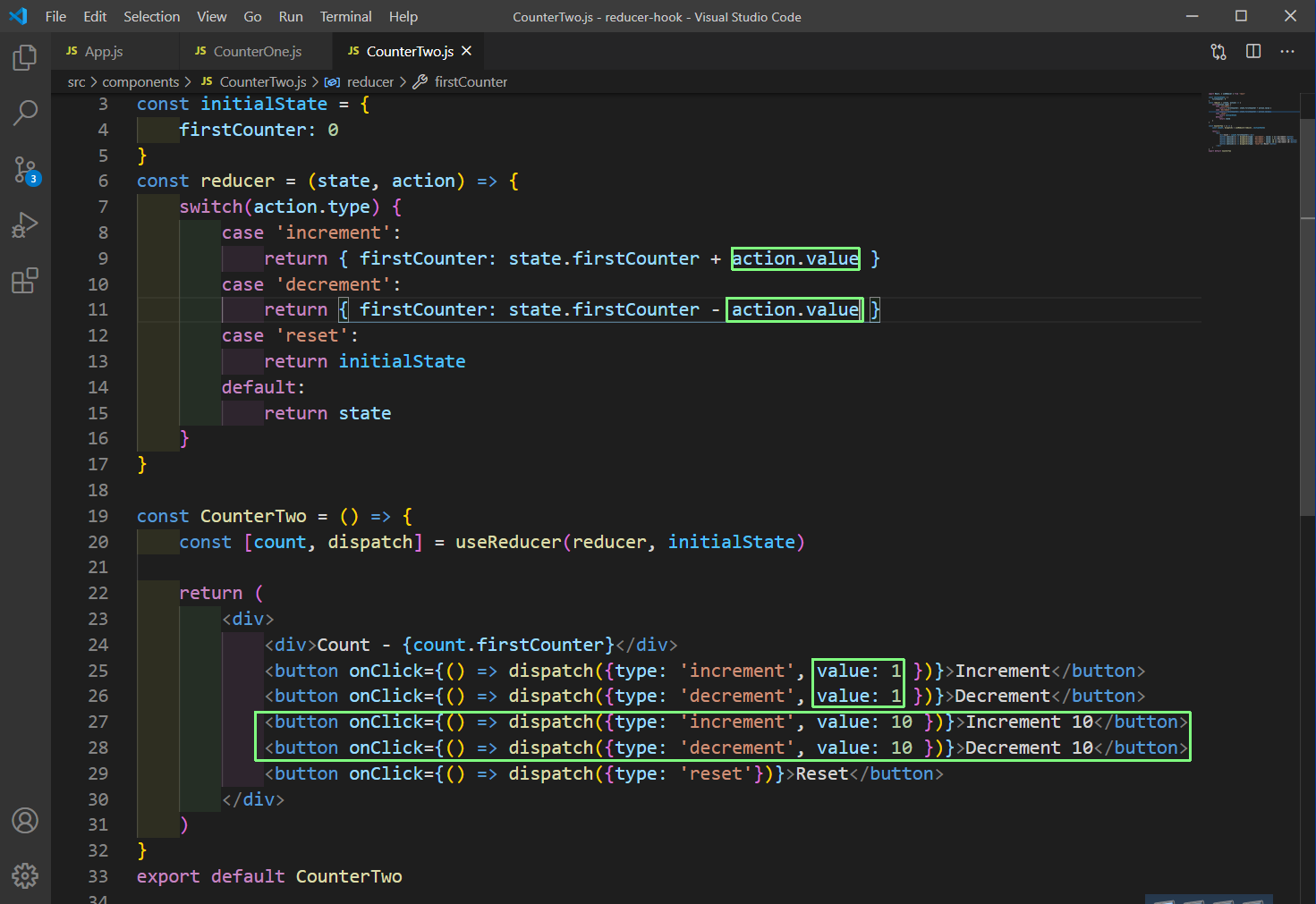 And now we can see all in action at localhost.

In the next case, we want to maintain two different counters. We are creating a new counter secondCounter in the initialState. Now, we have two new cases as increment2 and decrement2, which will use the secondCounter. Also notice the …state been returned in all case. This is required or else all the state variables, won’t be updated. 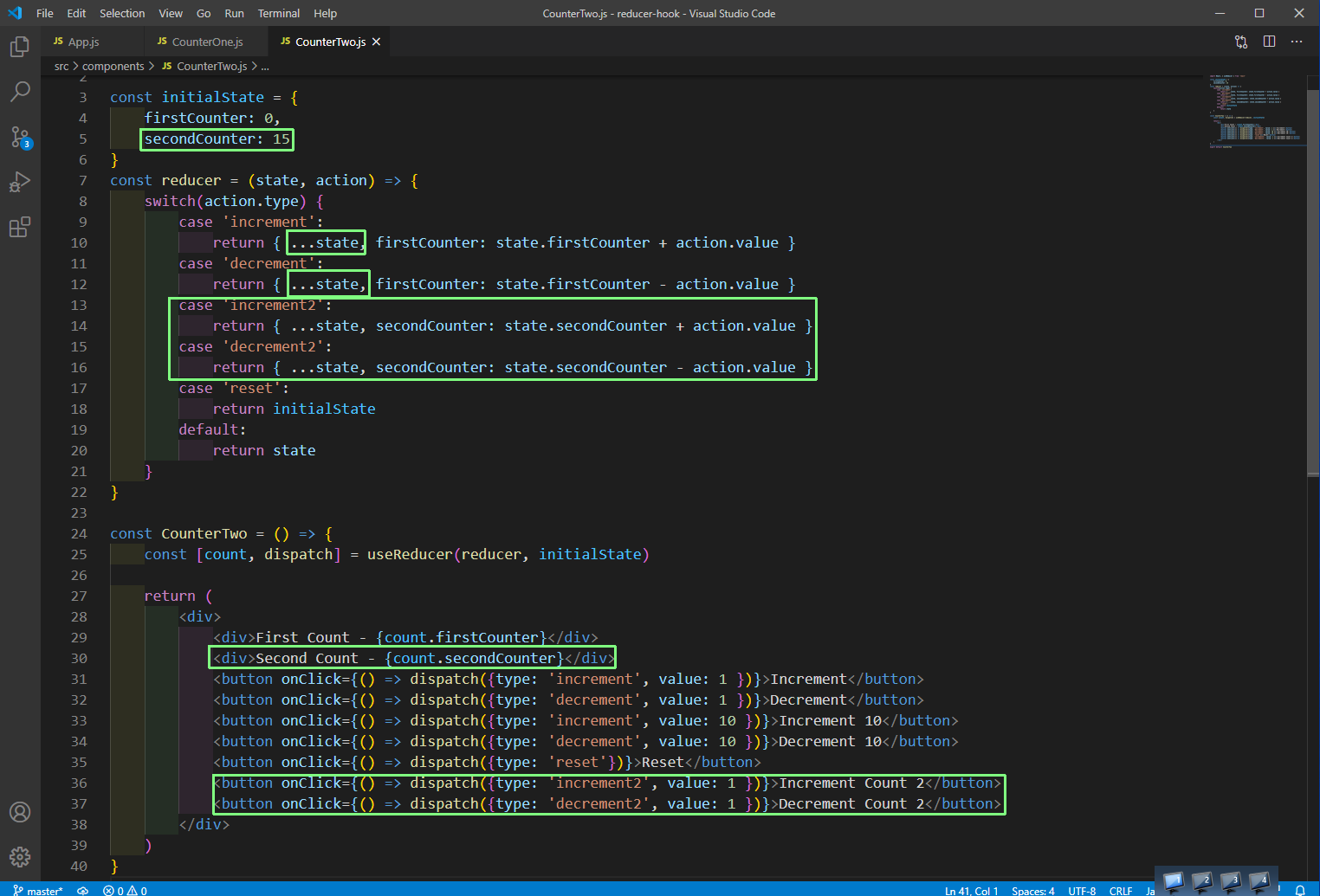 Now, when we move to localhost, we can see the new counter in action.