Welcome to part-5 of the series. We will learn about state in this part, but let’s first understand the difference between state and props.

Since, react have two important concepts. One been props and other been state, they are compared a lot. And also differentiated a lot. Below diagram show the difference between them.

As, per the above diagram state is managed within a component. So, we will first create a state variable. Create a new file Counter.js inside the component folder. It is a class based component and we have the class constructor in it. The state variable is declared with this.state inside a constructor and is an object. We can put any numbers of key-value pair in it.

We are declaring count inside the state variable, with the initial value of 0. Now, inside our render() method we access it by this.state.count.

Now, in localhost it will show the initial value.

Now, whenever we want to change the value of state, we do it thorough setState method. We have added a button and a onClick event to it. Next, we are calling incrementCount function.

On important thing to notice is that at line 9, we are using the bind. This is done because the this keyword will throw error, if we don’t give it.

Inside the incrementCount function, we are calling the this.setState and increasing the count value. 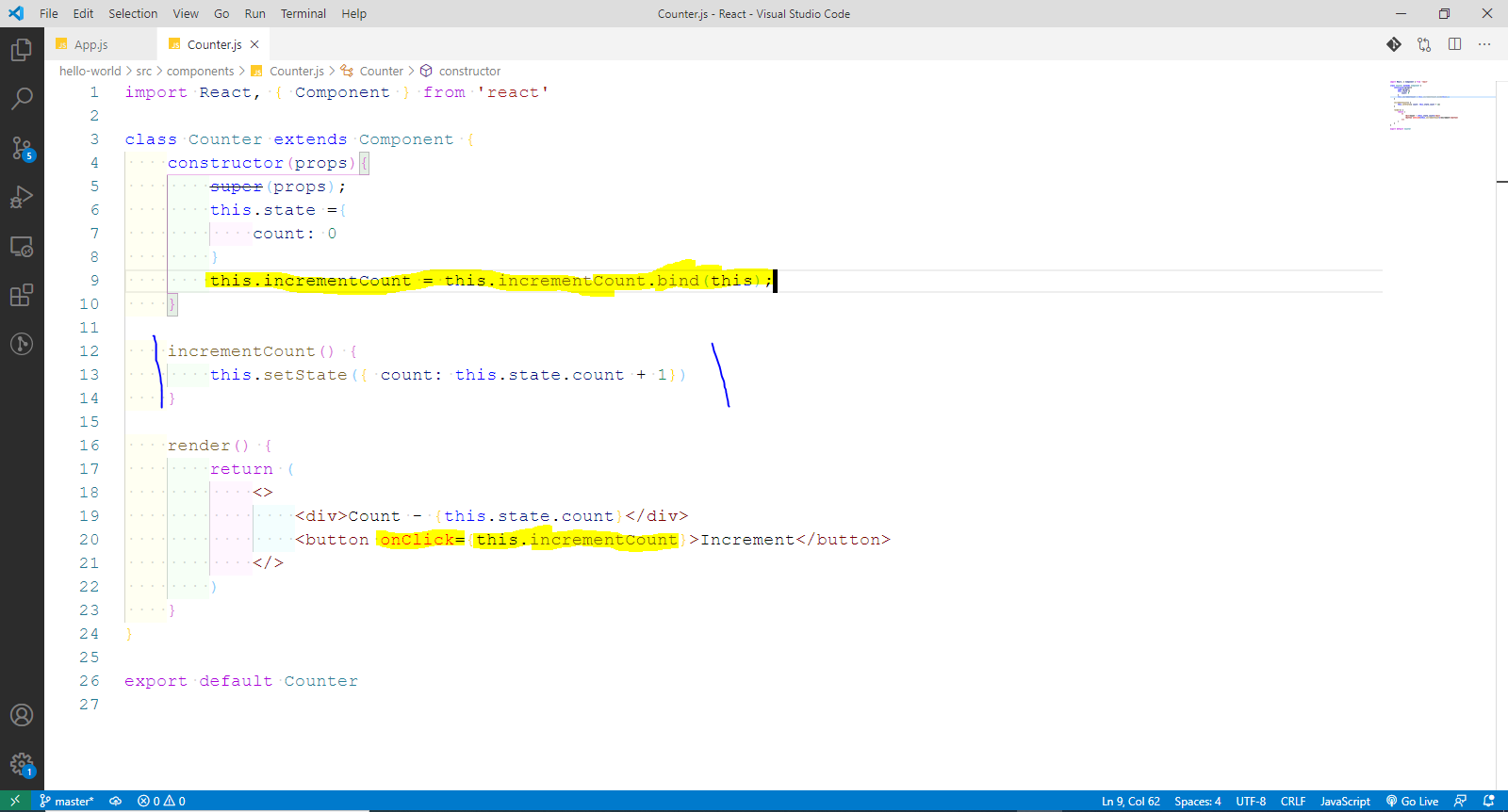 If we go to localhost and click on button, it will show correctly.

Before moving forward, we will refactor the code and get rid of the bind. We will use arrow function to achieve it.

Now, we will try to increment the state directly and ditch the setState. We have also added a console log to check the state value. 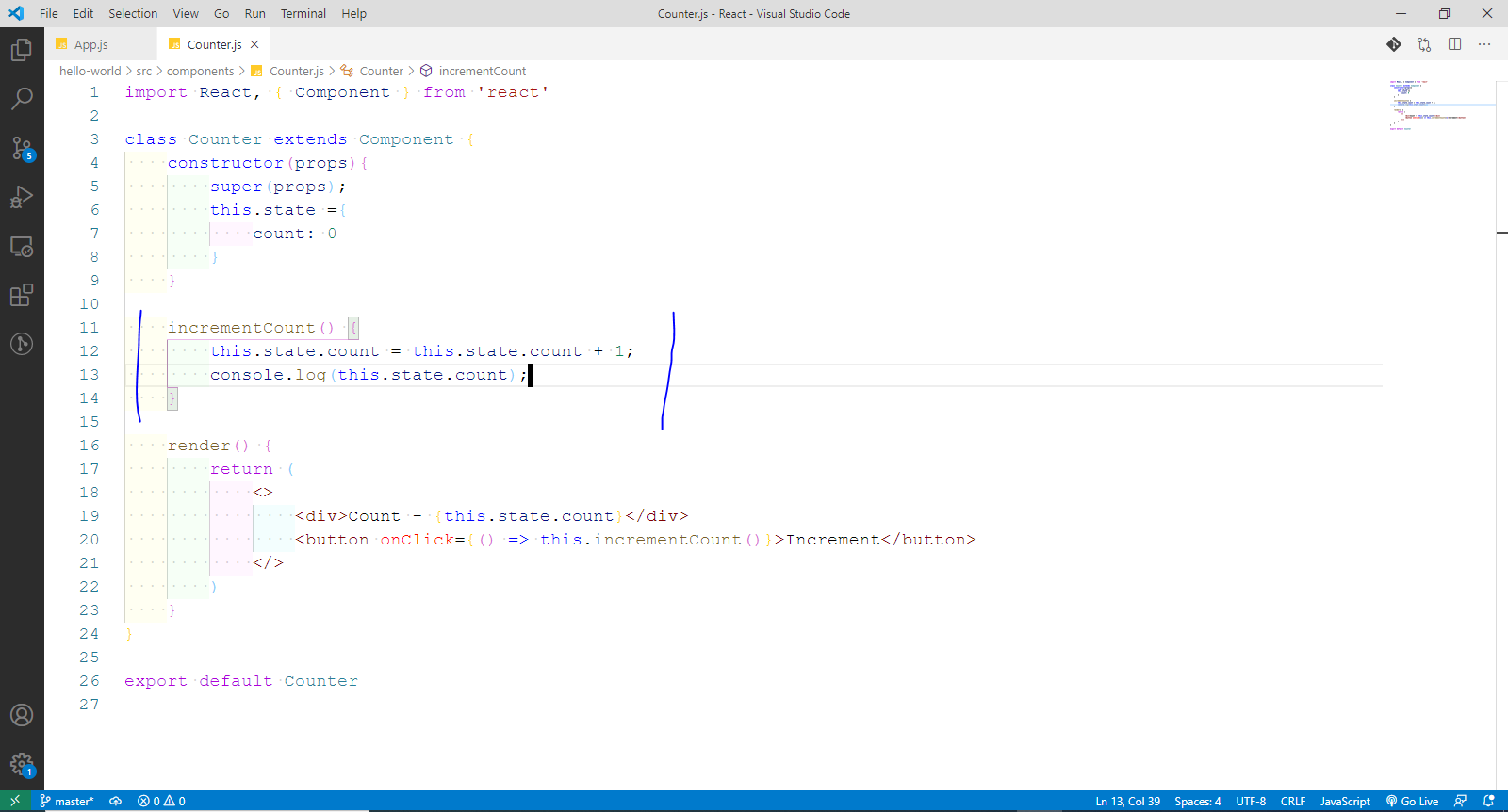 Now, in http://localhost:3000/ when we click on the Increment button, it only increments the console log at Line 13. And not the count at Line 19.

The reason behind this is that React only re-renders or run the component again when we use setState. So, in this case when we are not using the setState the render part is not running. 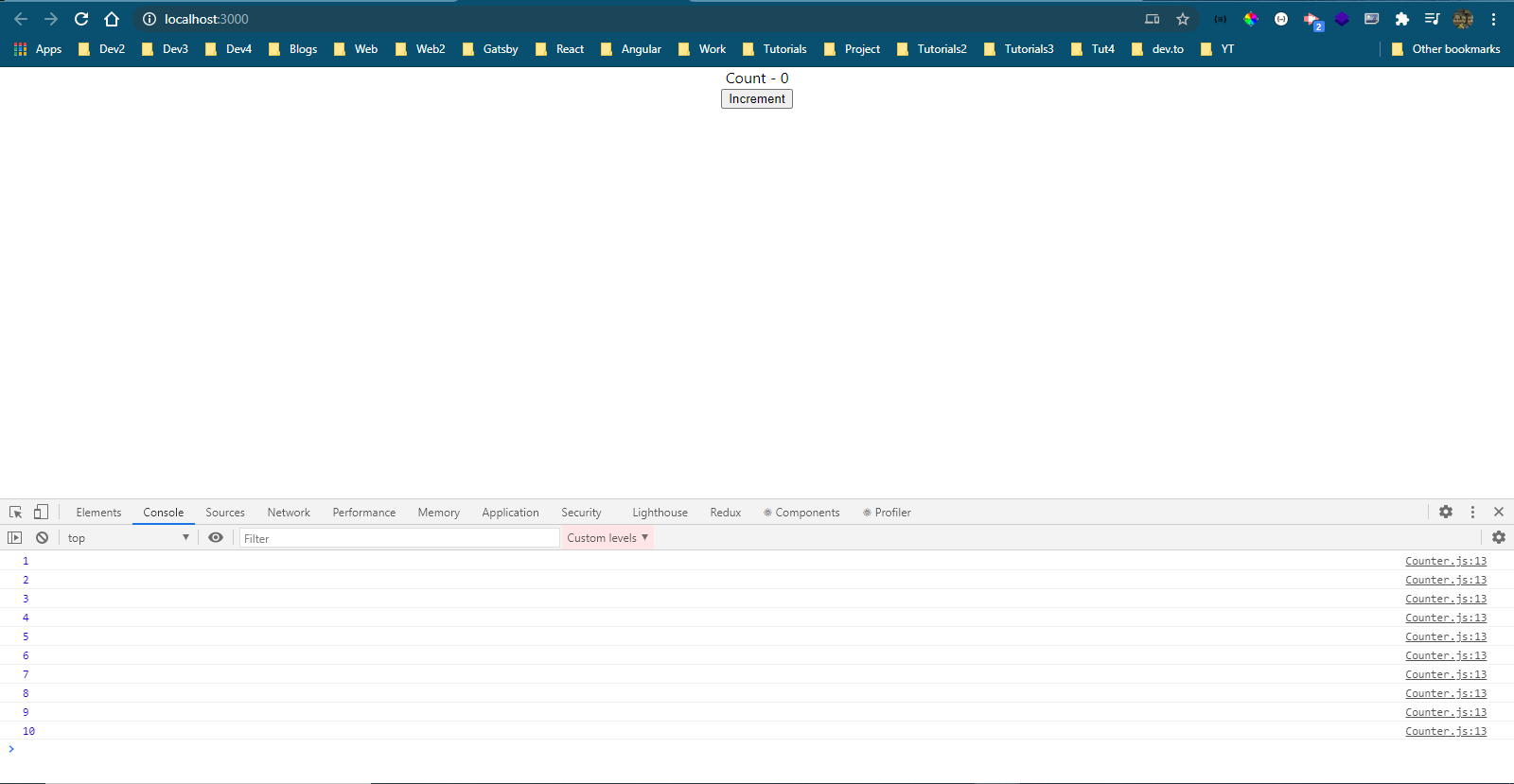 So, revert it back and use the setState again.

Now, back in localhost click on the Increment button. One thing to notice that the console log is one behind the value displayed on the Count. This is because calls to setState are asynchronous. So, here console log is called before the state is set.

Many times in our code we need to execute the code only after the state has been set. To handle such a situation, as in above case. we pass a callback parameter to the setState method.

We will refactor our above code to use the callback as a second parameter to setState.

This is because React may group multiple setState calls, into a single update for better performance

So, whenever you have to update the state based on the previous state, we need to pass function as an argument instead of regular object.

So, we will modify our code to use the previous state instead of current state and it will solve our problem.

Now, back to localhost, when we click once it will increment value by 5.

Let’s quickly summarize what we have learnt.