Welcome to part-2 of the series. In the previous part we had learnt about React and just created a project hello-world with create-react-app.

We will learn more about the files and the folders, which were automatically created by React. In the root of our project we have 3 folders and 4 files. 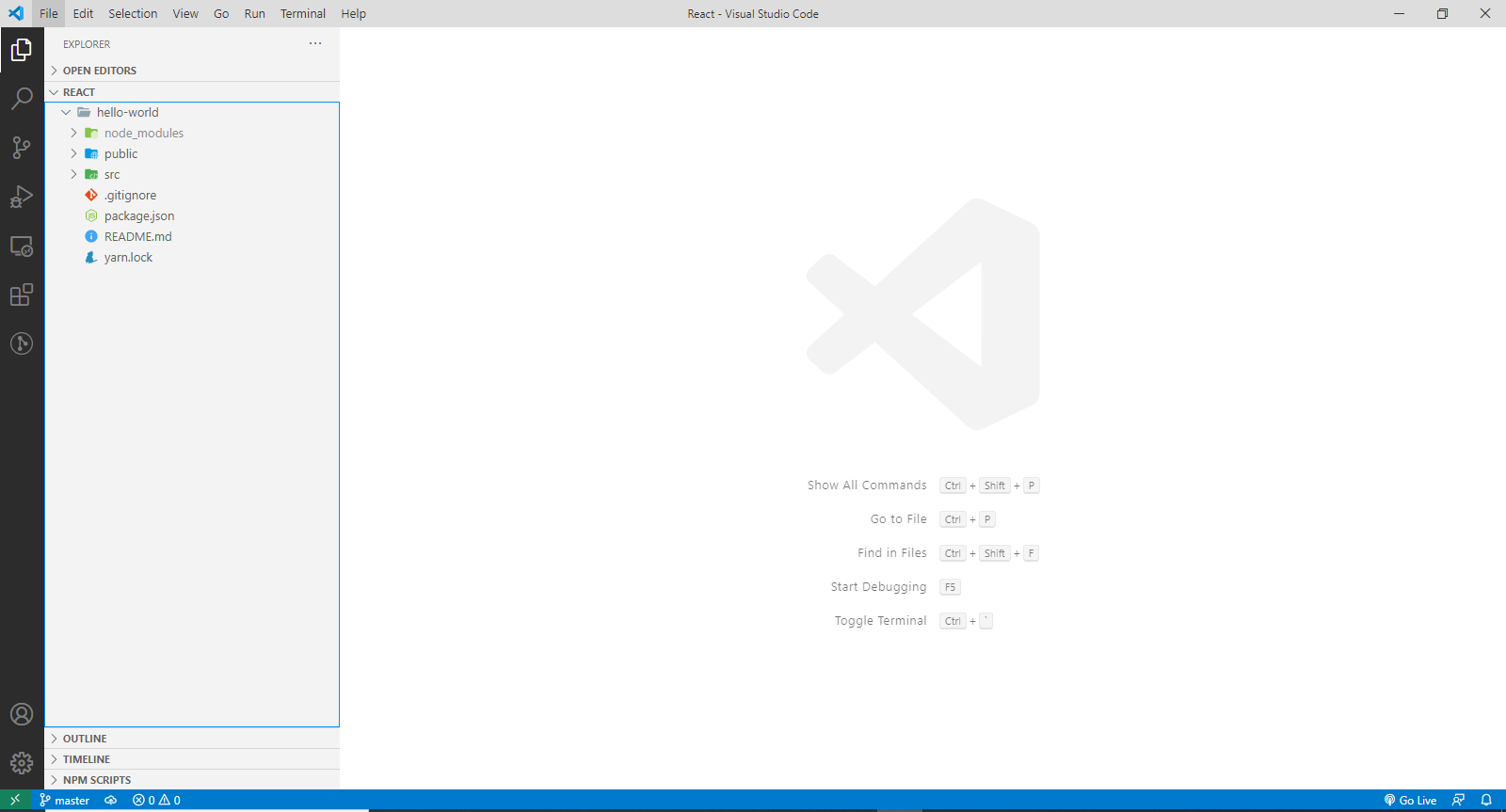 First, the file package.json contains all our dependencies and scripts required for the project. It also tell about the version of ReactJS. 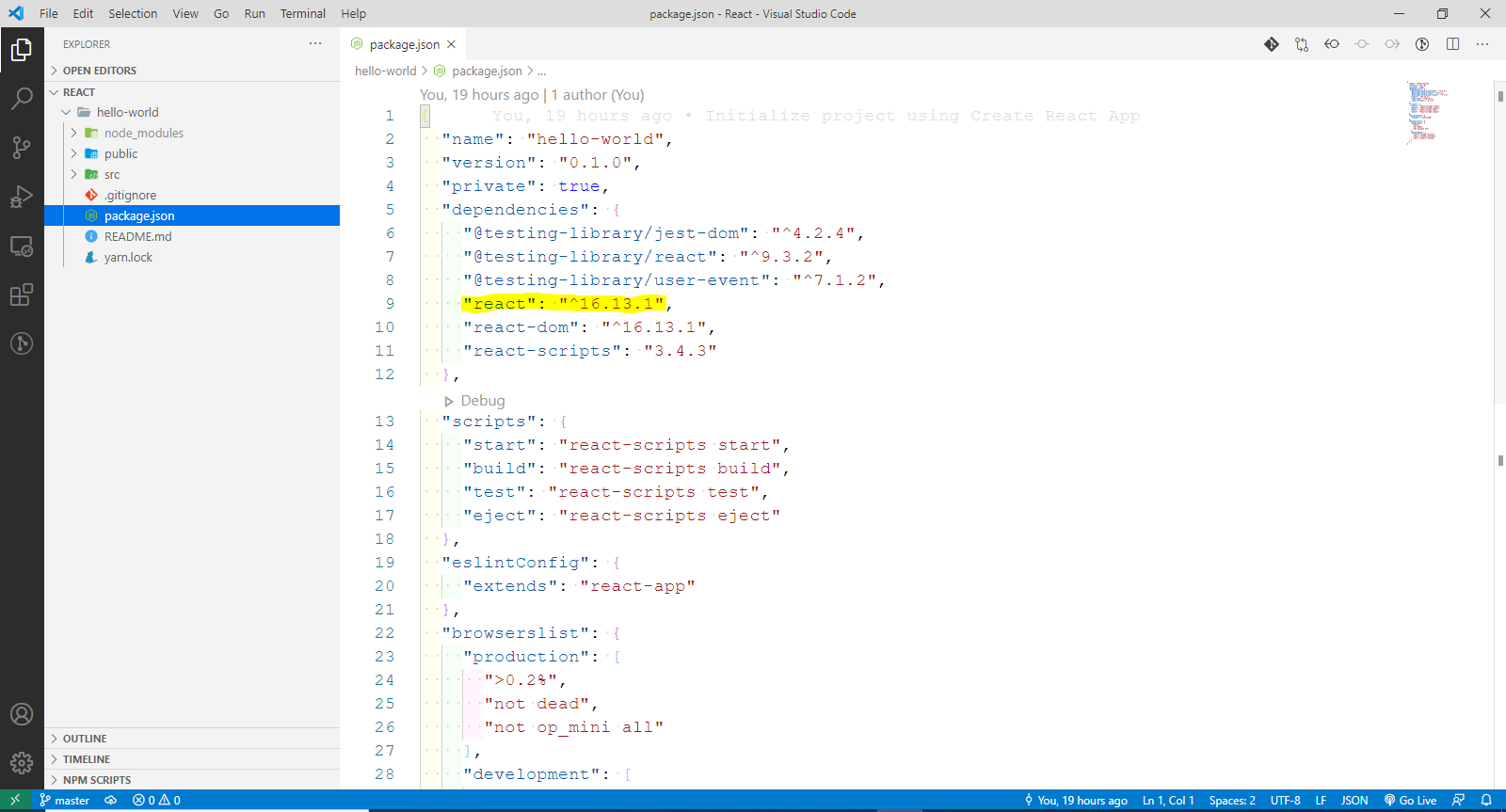 The next file is yarn.lock which was created because of the package manager yarn. You will also have a package-lock.json file, as soon as you install a package via npm. They simply ensures consistent installation of your dependencies. 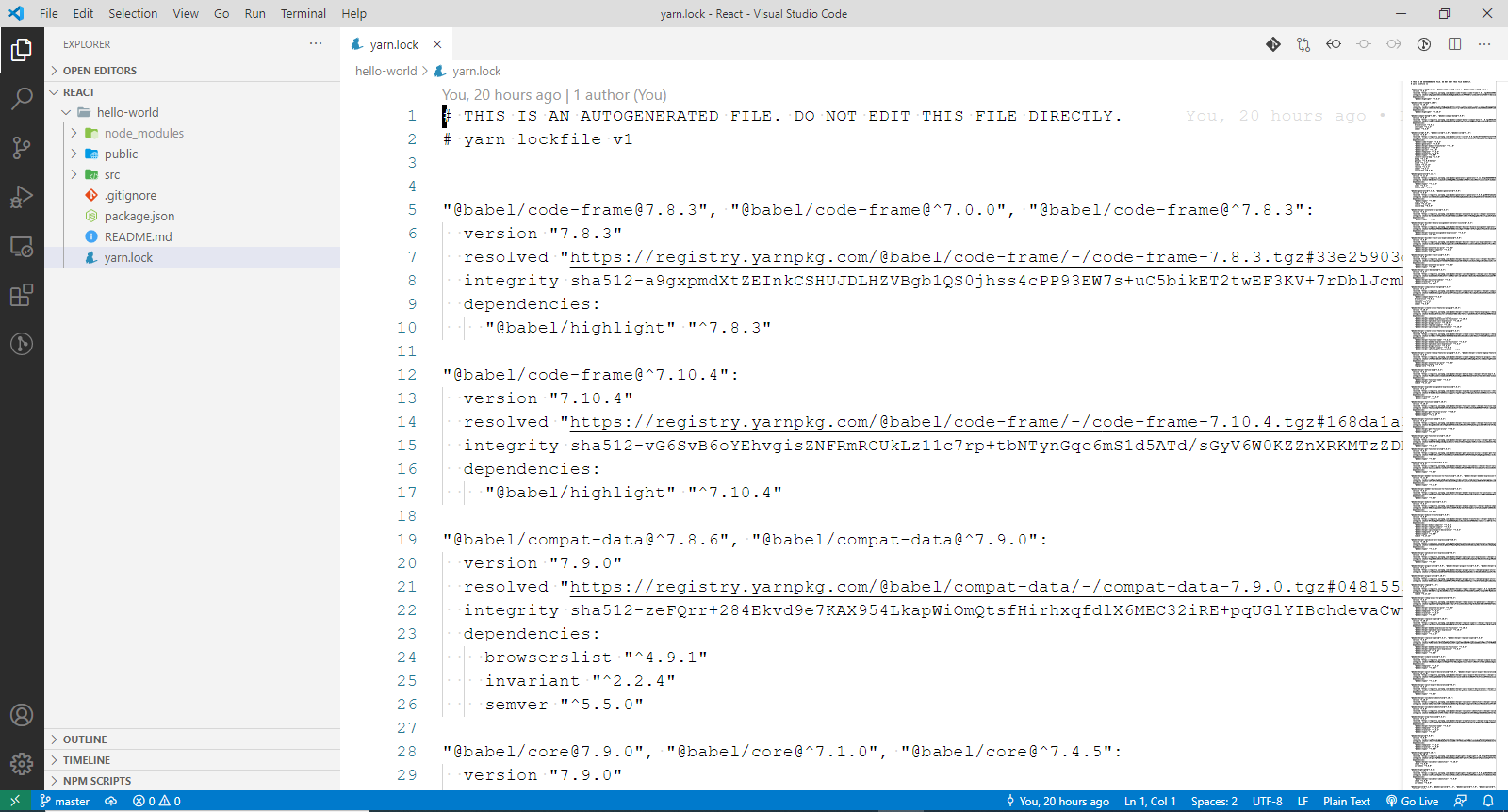 We also have a .gitignore file. In this file whatever is put will not get pushed to git control system like github. 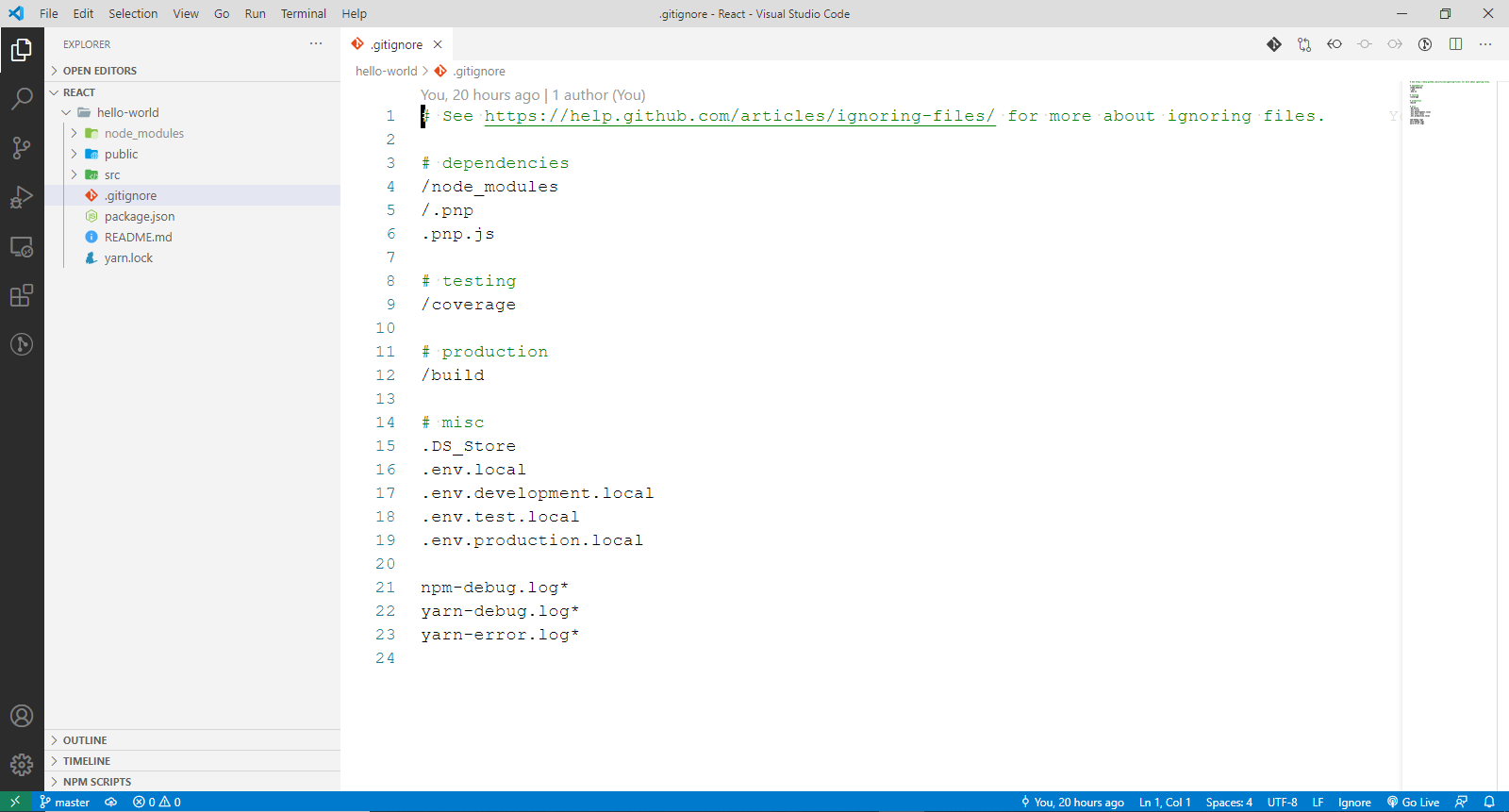 The next file is README.md file, which contains information about React in a markdown format. 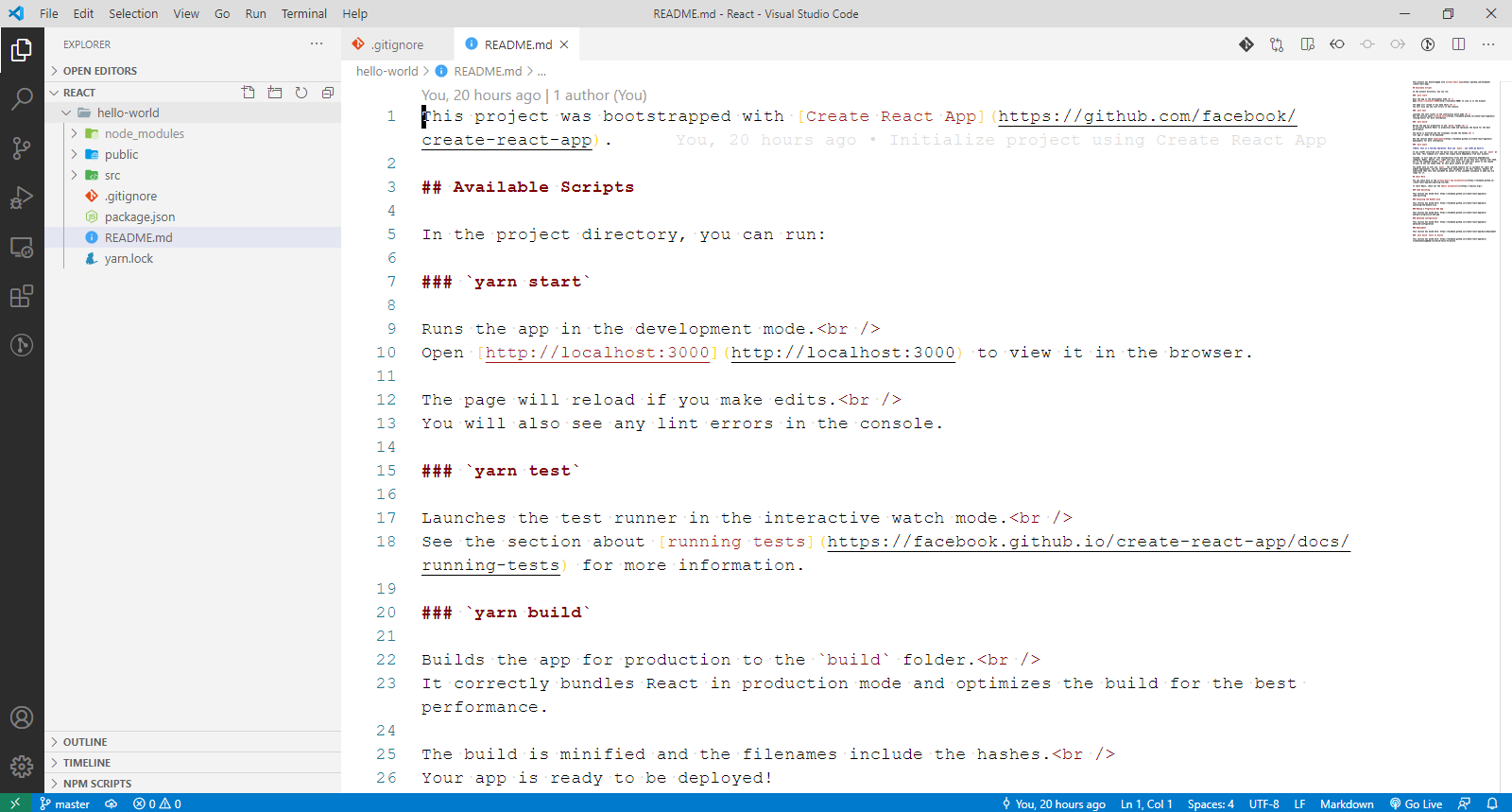 The first folder is node_modules folder, which is the folder in which all the dependencies are installed. The folder takes the most amount of space in a React project, so make sure to delete it if you run out of space in your system. This is also included in the .gitignore file, so that it is not pushed to github. 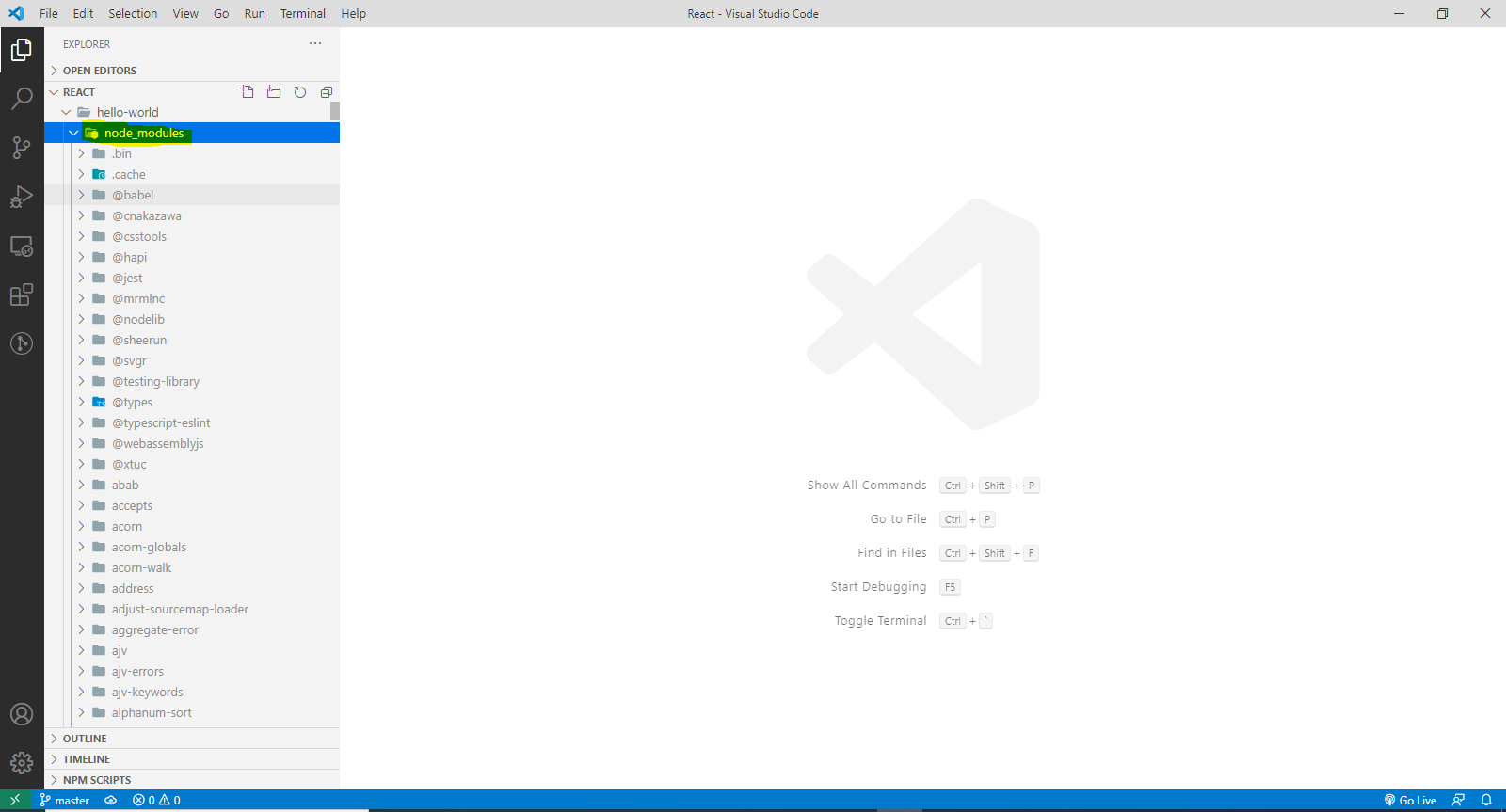 The next folder is the public folder, which contains six files. Out of which manifest.json is concerned with progressive web-apps, which we are not going to look in this project. We also have the favicon.ico, logo192.png , logo512.png which are the icon and logo used by the default project.

The most important file here is index.html which is been used by React. Here, in the head part, we sometime include any external style sheet like bootstrap. But the body part is completely control by React and have the below important line. We will again comeback to it soon. 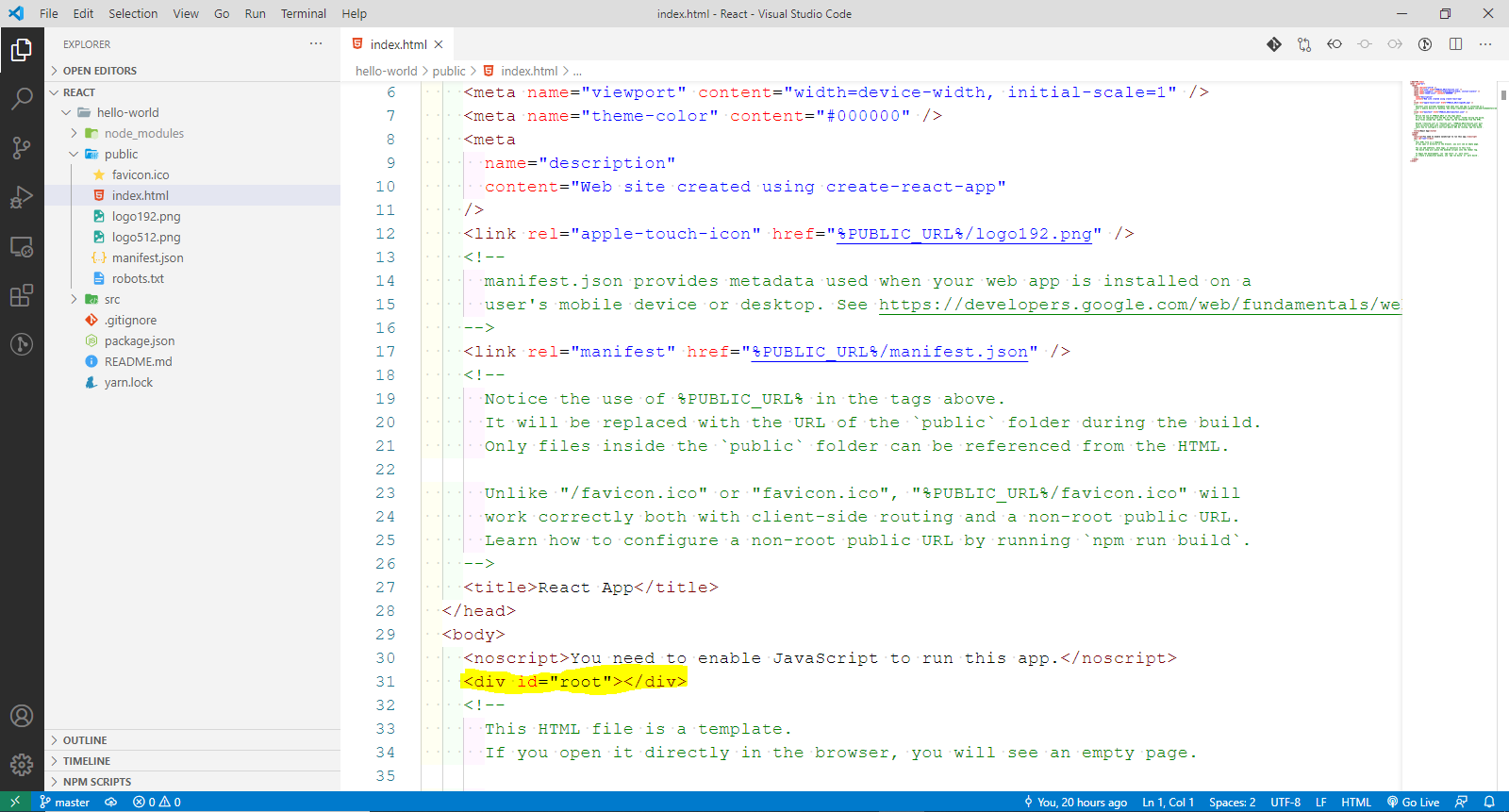 The folder src is where, we will work the most during development. The starting point of a React app is index.js. Here at Line 9, we have App file been rendered and at Line 11 we have document.getElementById(‘root’).

This is the div from index.html file. So, this is the whole logic i.e. App component been rendered in root id. 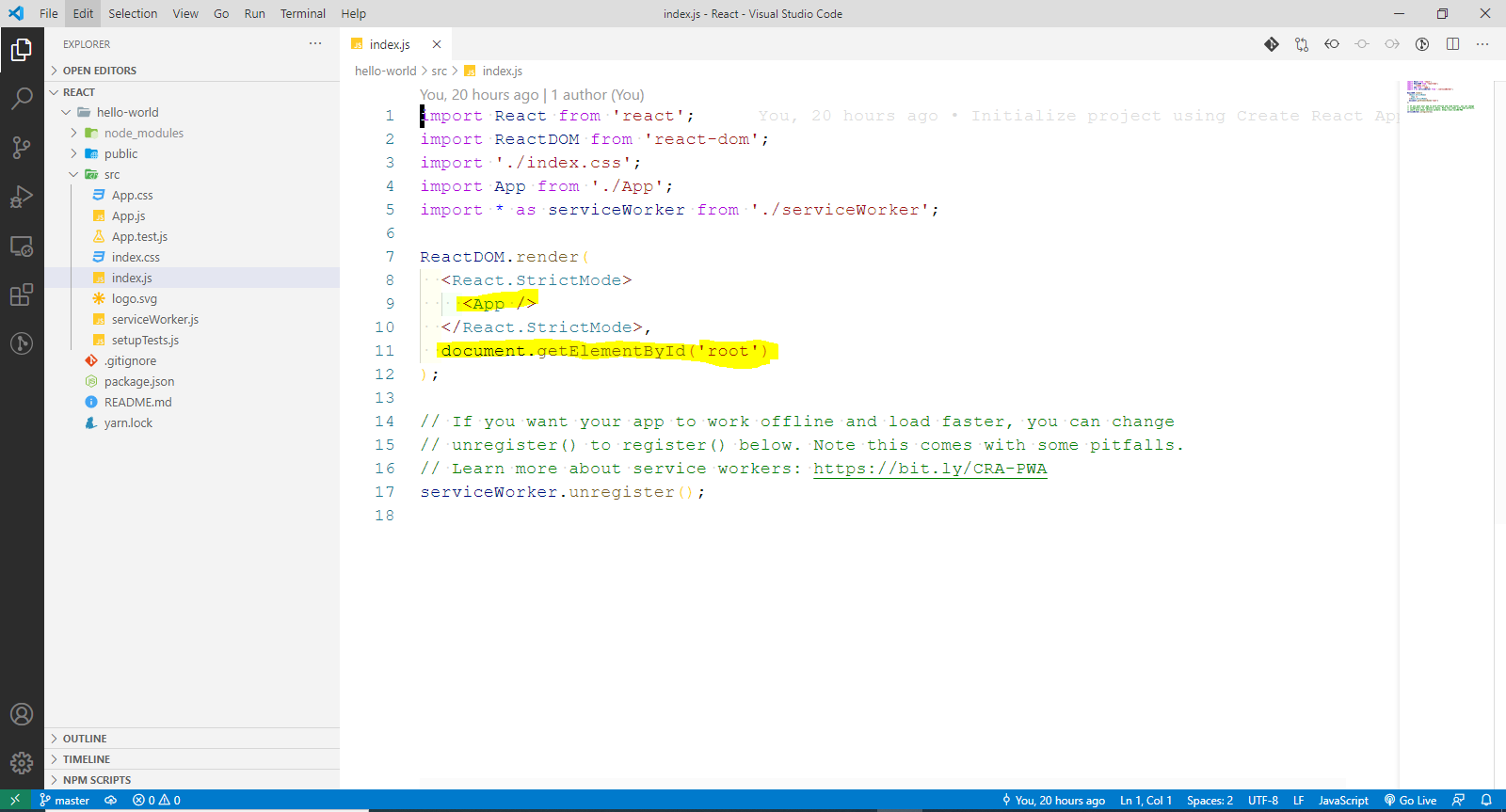 Now, we will look into the App.js file. The content of this file is only shown in http://localhost:3000/ which we had seen in the previous part. It uses styles from App.css file and logo from logo.svg file in the same folder. 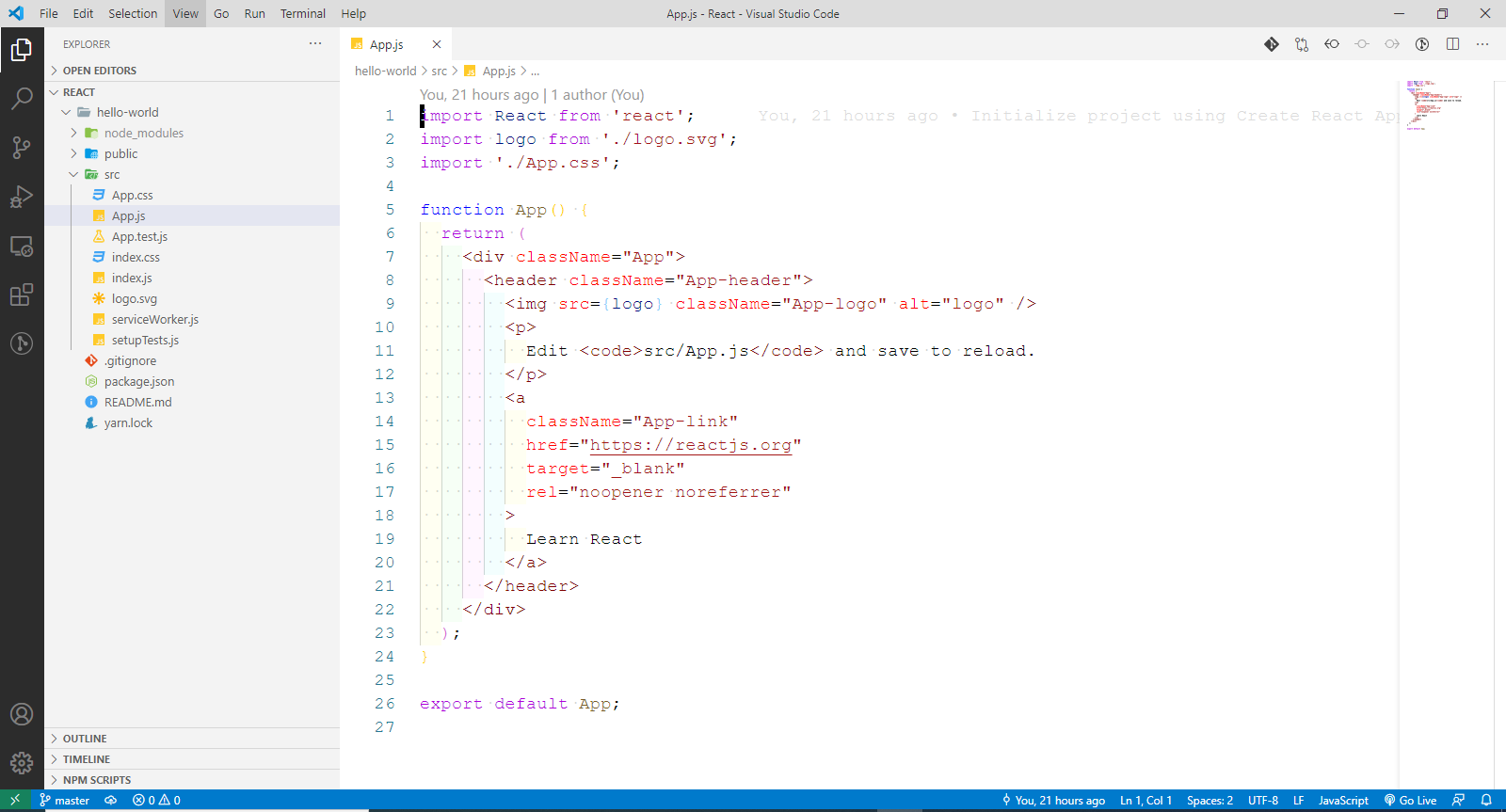 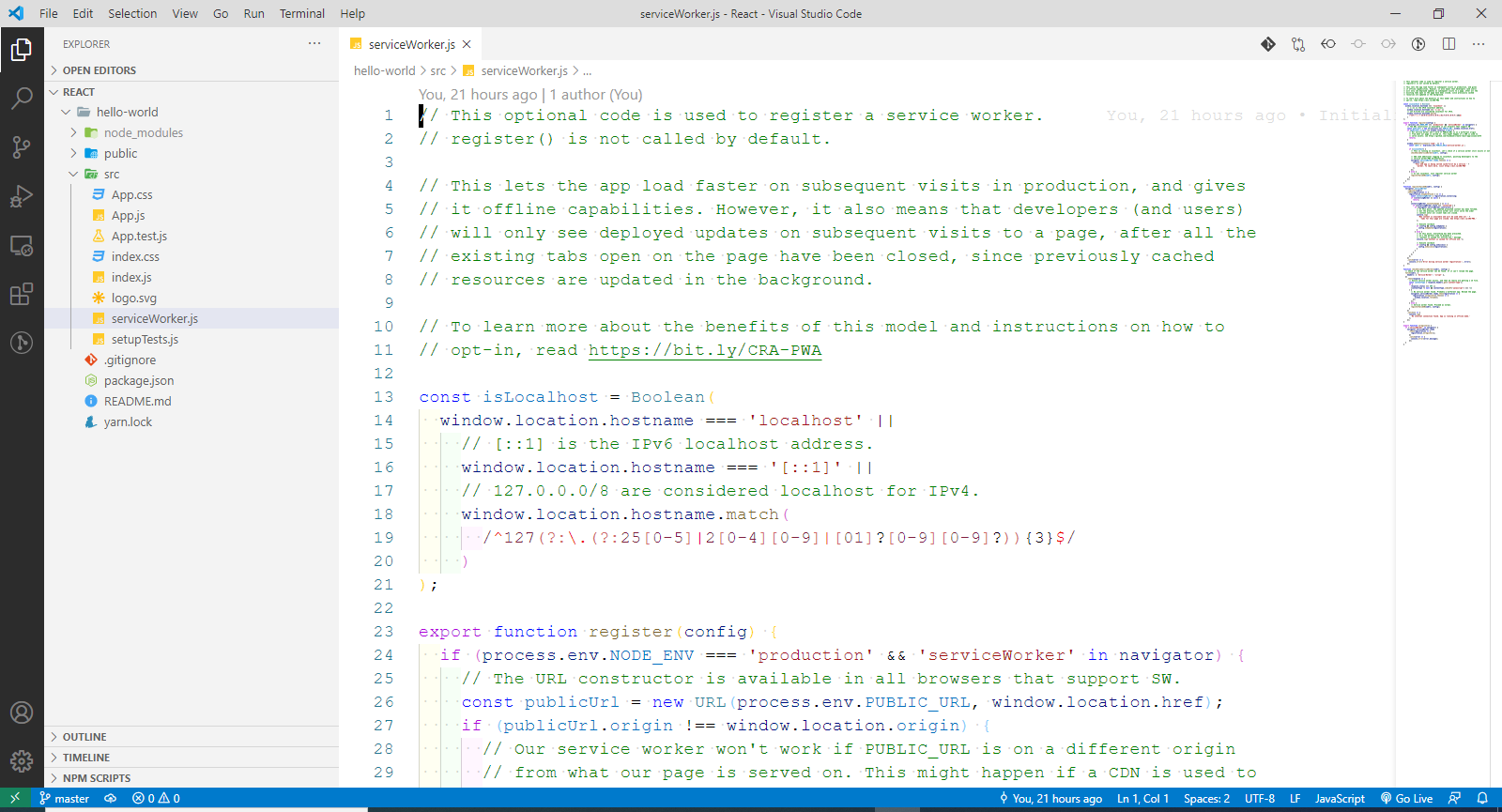 So, that is the folder structure of a React App created using create-react-app.

To recap, when you run npm start in the terminal, the index.html file is server in the browser. In index.html we have root id, which shows the html from our Appcomponent.