Welcome to part-12 of the series.We will learn about Pure Components first in this part.

Actually, there is a second way to create class components and that is by extending the PureComponent class from React. They work exactly the same, as Regular component but to see the real difference, we will create a Regular Component and Pure Component and call them from a Parent Component.

So, let’s head back to our old project and create a file ParentComp.js first. Put the below content in it. Here, we have a class based component called ParentComp, which have a state variable name. Now, we also have a componentDidMount(), which have a setInterval() inside it. The setInterval() is run every 2 seconds and it update the state variable name, by this.setState(). But notice that it is keeping the name same ie ‘Nabendu’.

In the render() method, it have some console logs. In the return, it is rendering two component RegularComponent and PureComp and passing the state variable name as props. 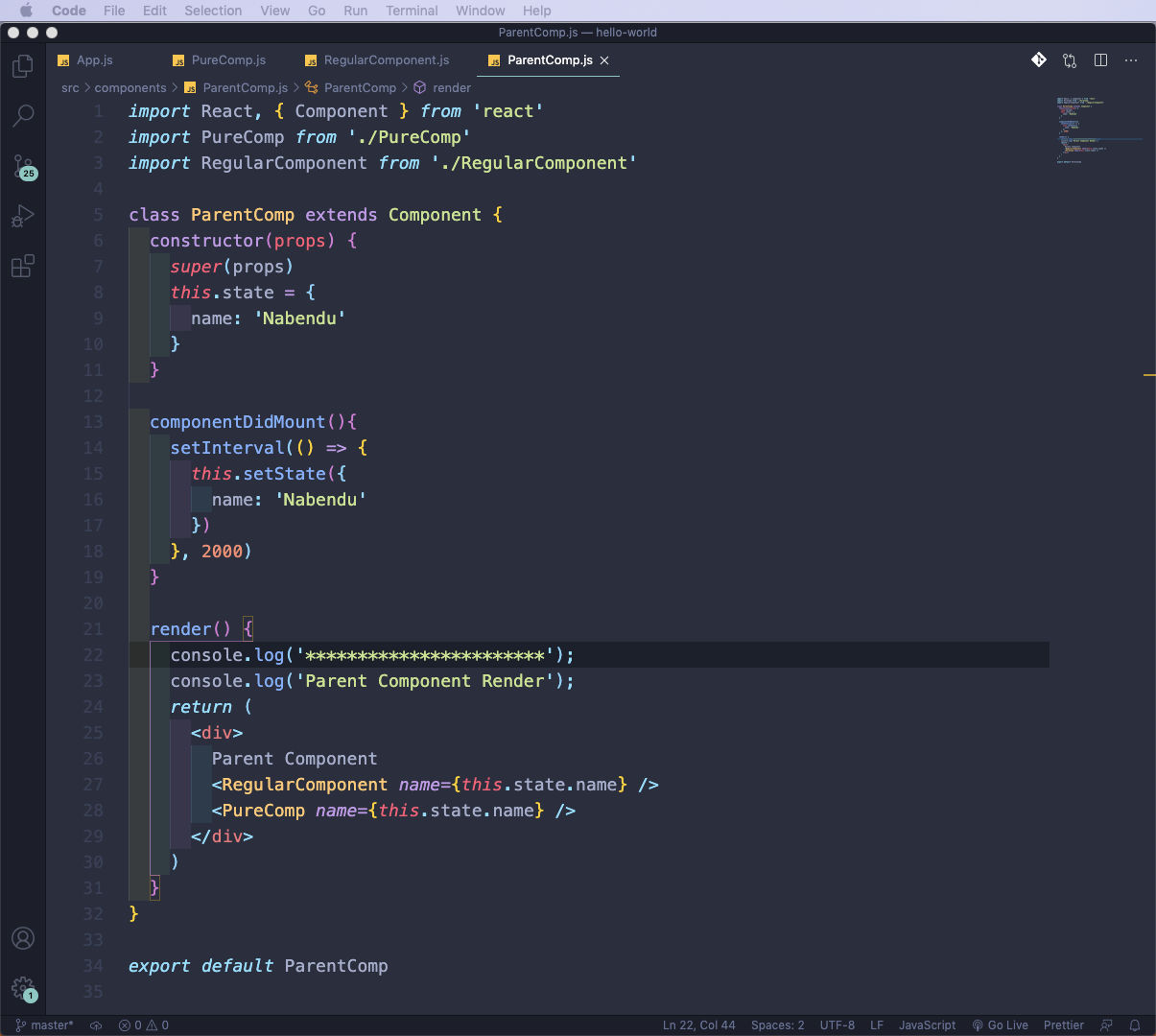 We will first create the RegularComponent, which simply have a console log. In the return, it is using the props from the ParentComp.

We will first create the PureComp, which simply have a console log. In the return, it is using the props from the ParentComp. But notice the import and the extends, both of which is PureComponent instead of the regular Component.

Now, we need to add the ParentComp in our App.js, for it to show in the browser. After adding that, in the browser we can see all three components been shown, but the real play happens in the console. 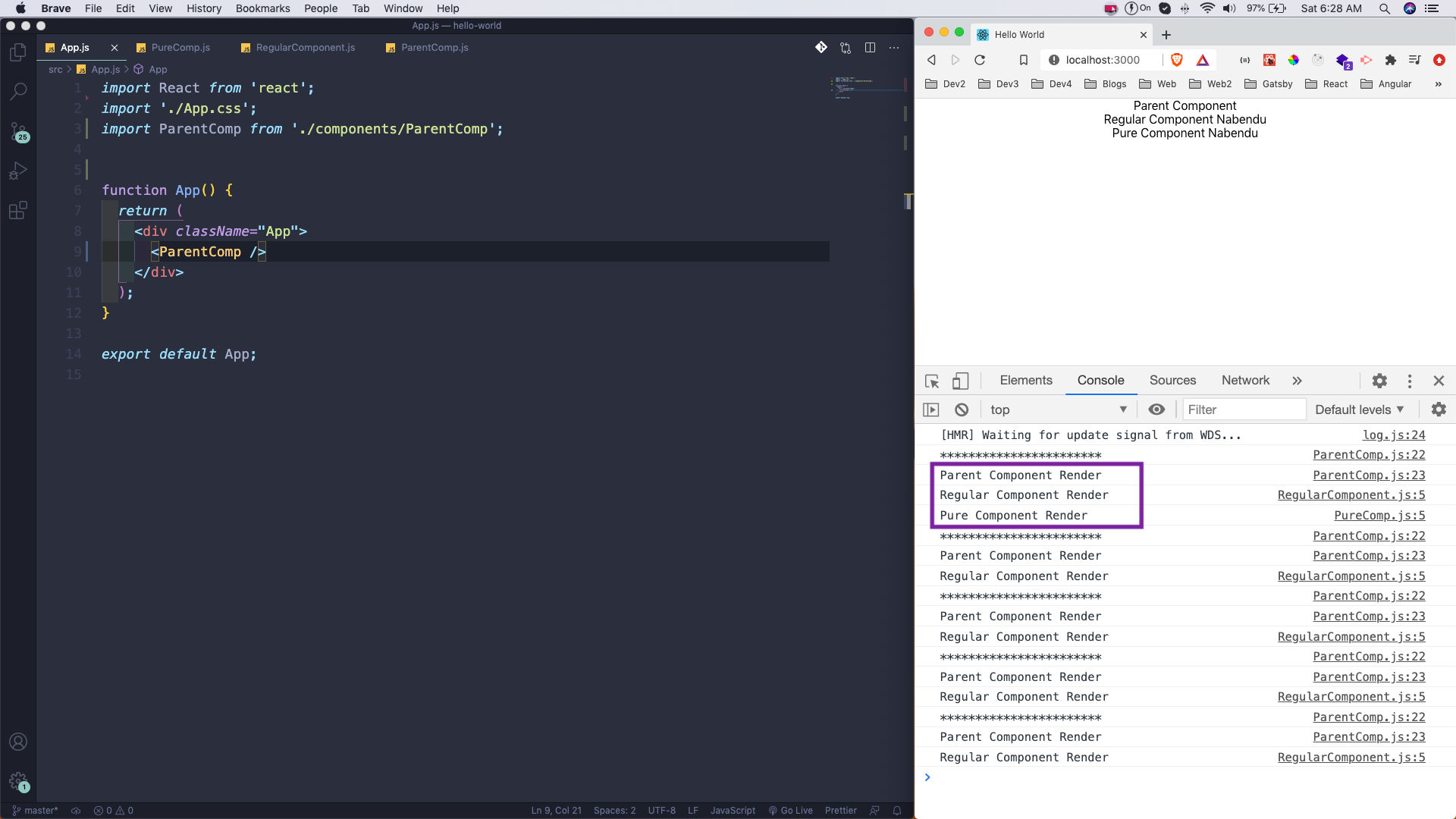 The above is the difference between Regular Component and Pure Component.

It is because a regular component doesn’t implement the shouldComponentUpdate method. It always returns true by default.

On the other hand , a pure component implements the shouldComponentUpdate method, with a shallow props and state comparison.

State & Props Comparison A pure component does Shallow Comparison of prevState with currentState and if there is a difference, then only re-renders the component.

A pure component also, does Shallow Comparison of prevProps with currentProps and if there is a difference, then only re-renders the component.

In our case, the Pure component PureComp, receives the props of ‘Nabendu’, every two seconds. So, when it compares the prevProps with currentProps, there is no difference. So, it doesn’t re-renders the component.

Now, to look into the case of state comparison, we will make our ParentComp also a Pure Component, by extending it.

Here, we are doing state comparison of the name. It will be same after each time the setState is called after 2 seconds. So, everything will run only once including the child components, as shown in the console. 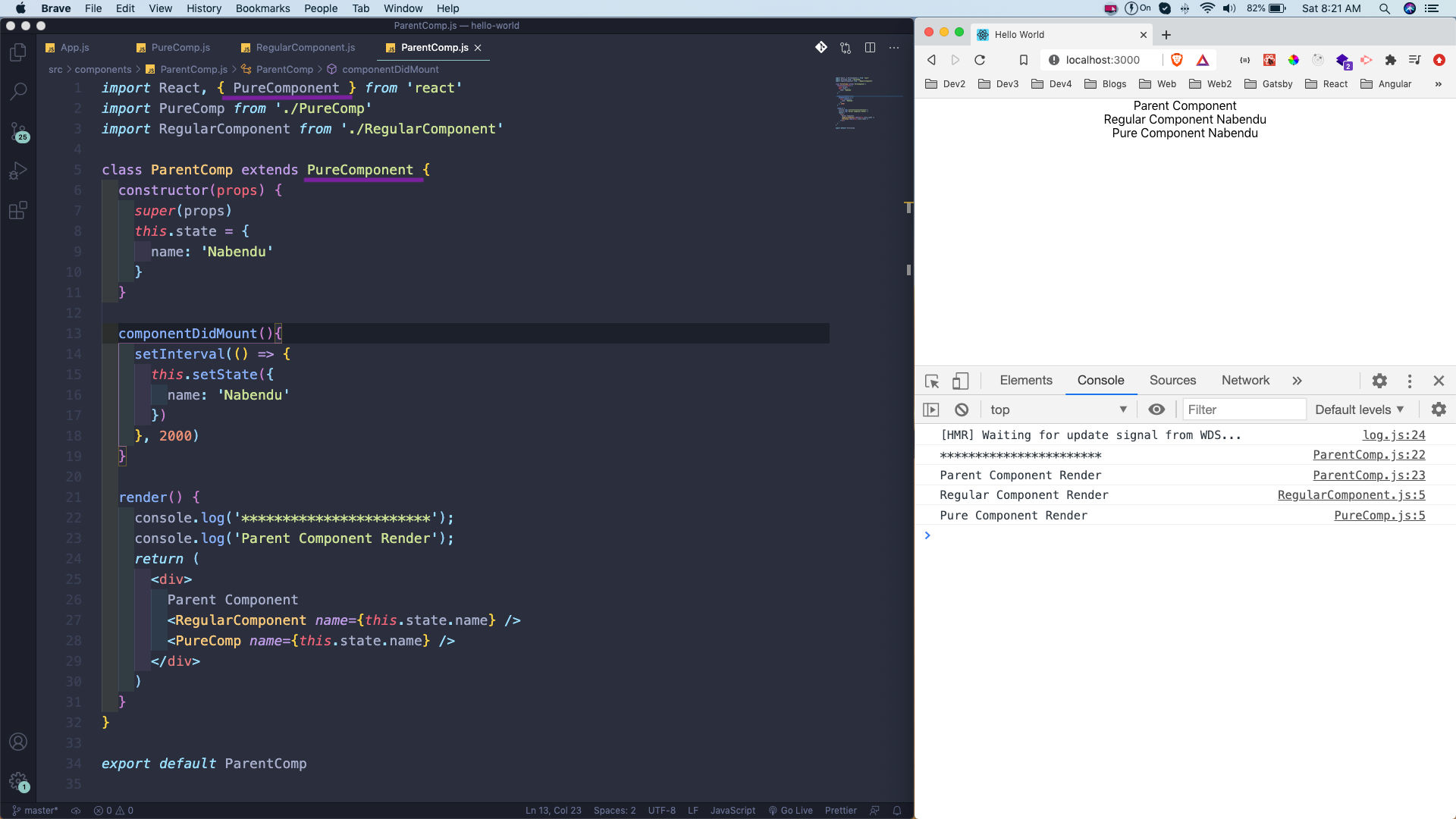 In React 16.6 Memo were introduced. They are completed similar to Pure Components, but are for Functional components.

Create a new file MemoComp.js inside the components folder. We are creating a simple functional component, which is getting a props name. We are just destructuring it and showing it.

Next, back in ParentComp.js we are importing this Memo component and rendering it. Also, notice that we had made the ParentComp back to a normal class based component.

As, we can see from the console the Parent Component and the Memo Component are rendering every 2 seconds. 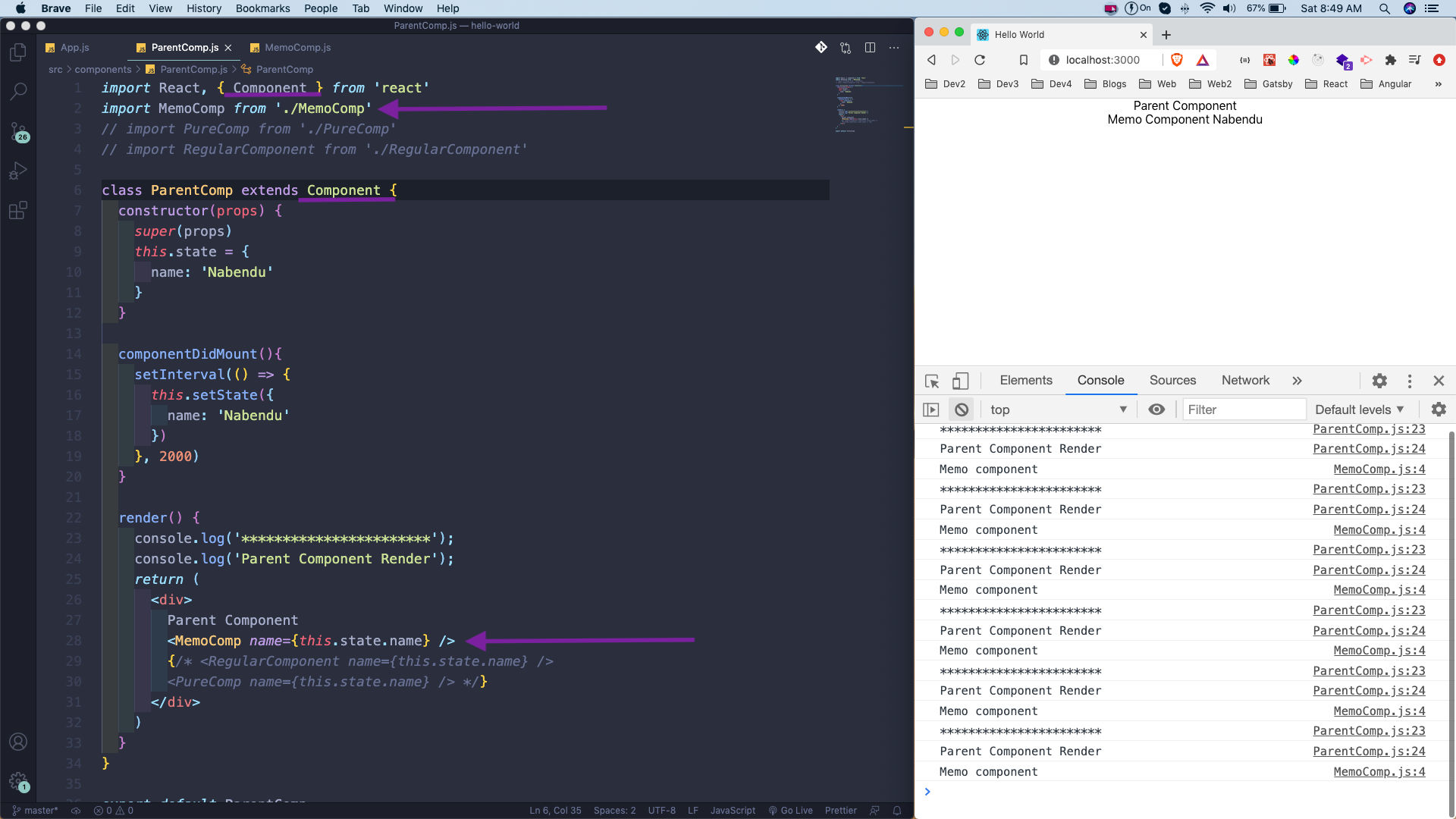 Now, to use Memo we need to use it as a Higher Order Component in the export in MemoComp.js file. 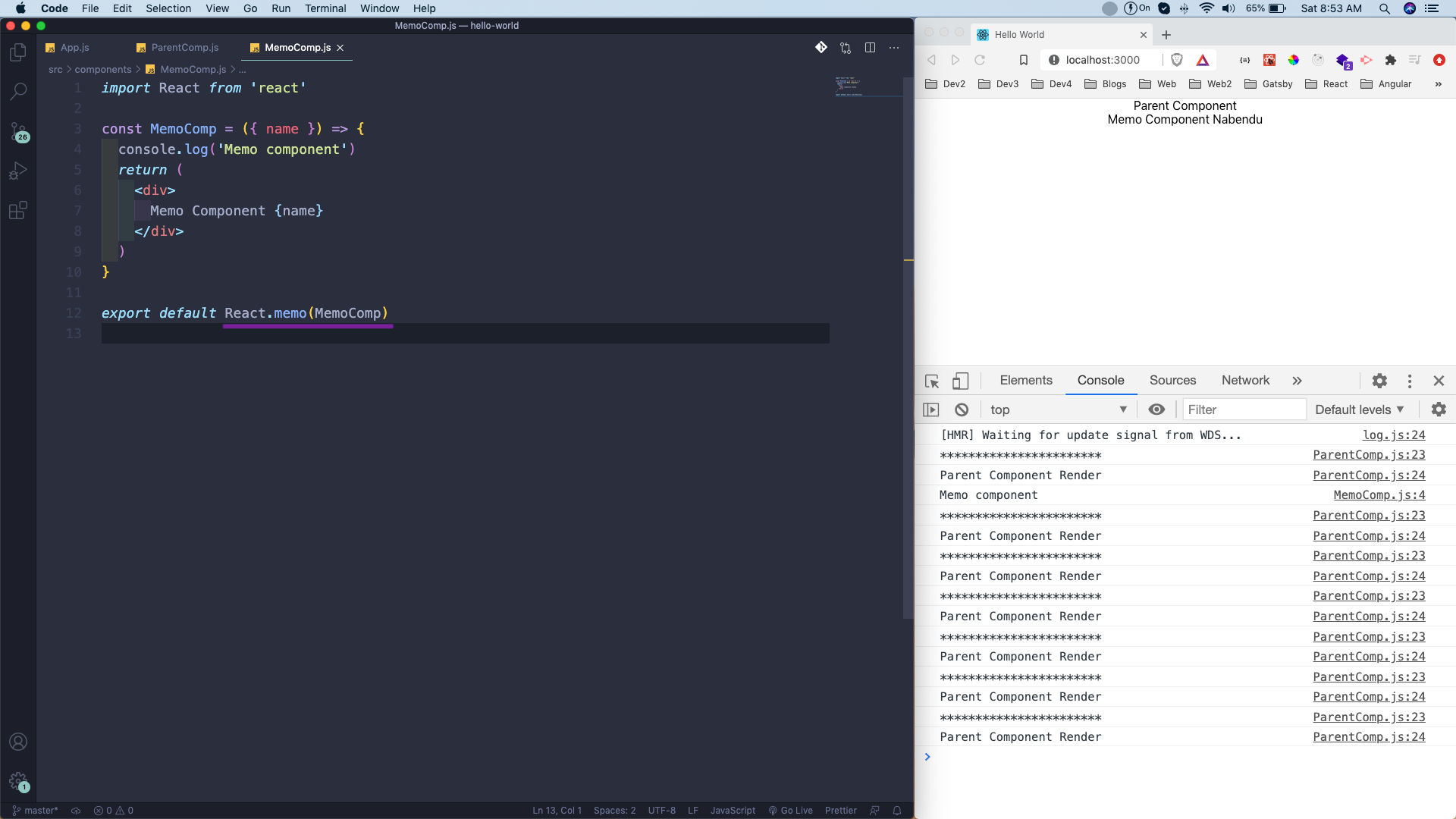 You can also find the code till this part in my github repo, here.

This completes part-12 of the series.