How about building a Music player on your own from scratch? Exciting right! Let’s start.

Folder Structure of the project

Open VSCode and create the basic HTML structure in an index.html file by ! and then pressing tab. Give the title as ‘Music Player’. Link style.css and script.js to the created HTML file and link FontAwesome css to use play, pause,next and previous icons. 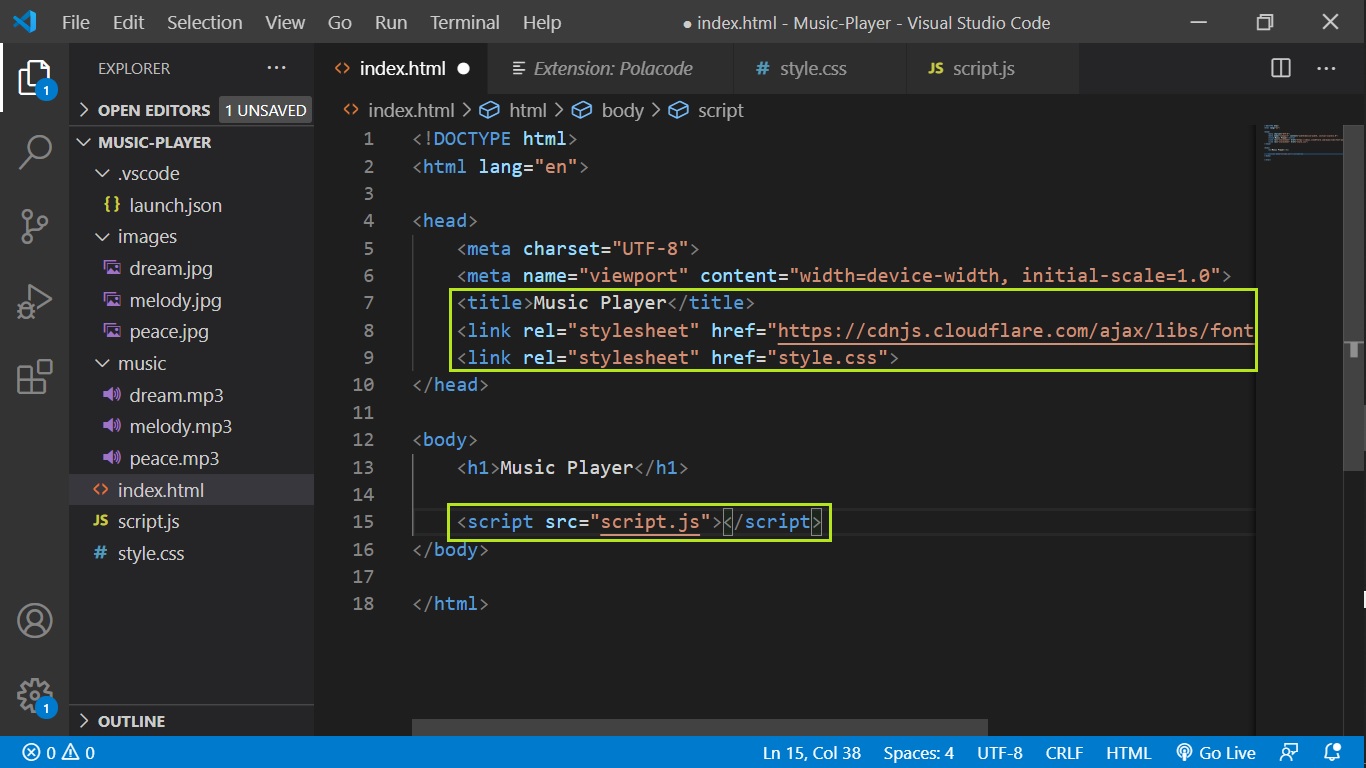 Inside the body, Create a audio-container class which will wrap around everything.

Inside audio-container class, create a audio-info class which holds the title of the song and the progress when we click play.

Add h4 tag with id = ‘title’ inside audio-info class and this is going to be populated dynamically with javascript with the current playing song.

Underneath audio-info class add audio tag with the source of the song and id .

Create a navigation class and we will have three buttons inside that to play the song, to play previous song and next song 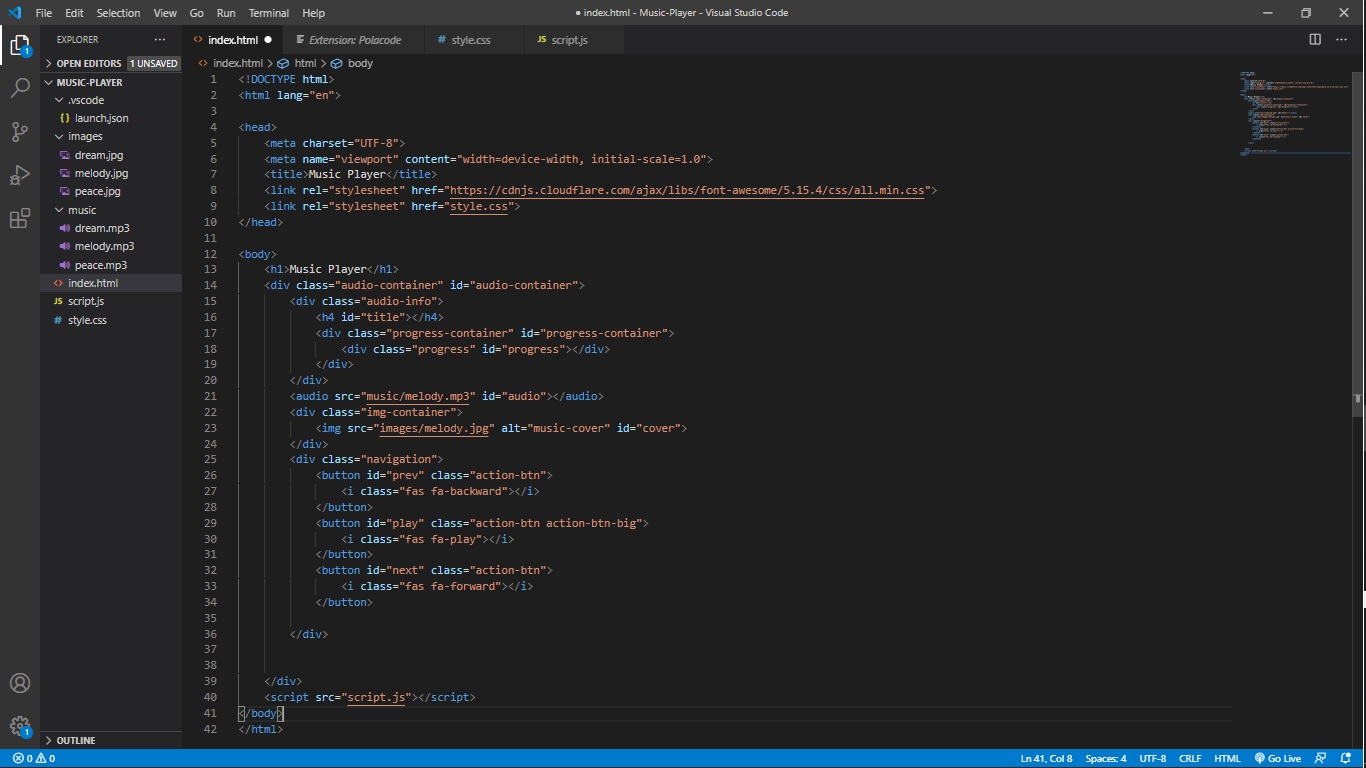 Quite a bit of CSS coding is required and I explained the only the important parts here and rest of the CSS code mostly deals with positioning,size and color of the elements.I shared the github link at the end of the post where you can see the complete code.

For the styling of the body, I have used linear gradient of yellow and orange color shades as background image.

Only when the music is playing the audio-info will popup. Refer the following CSS implementation 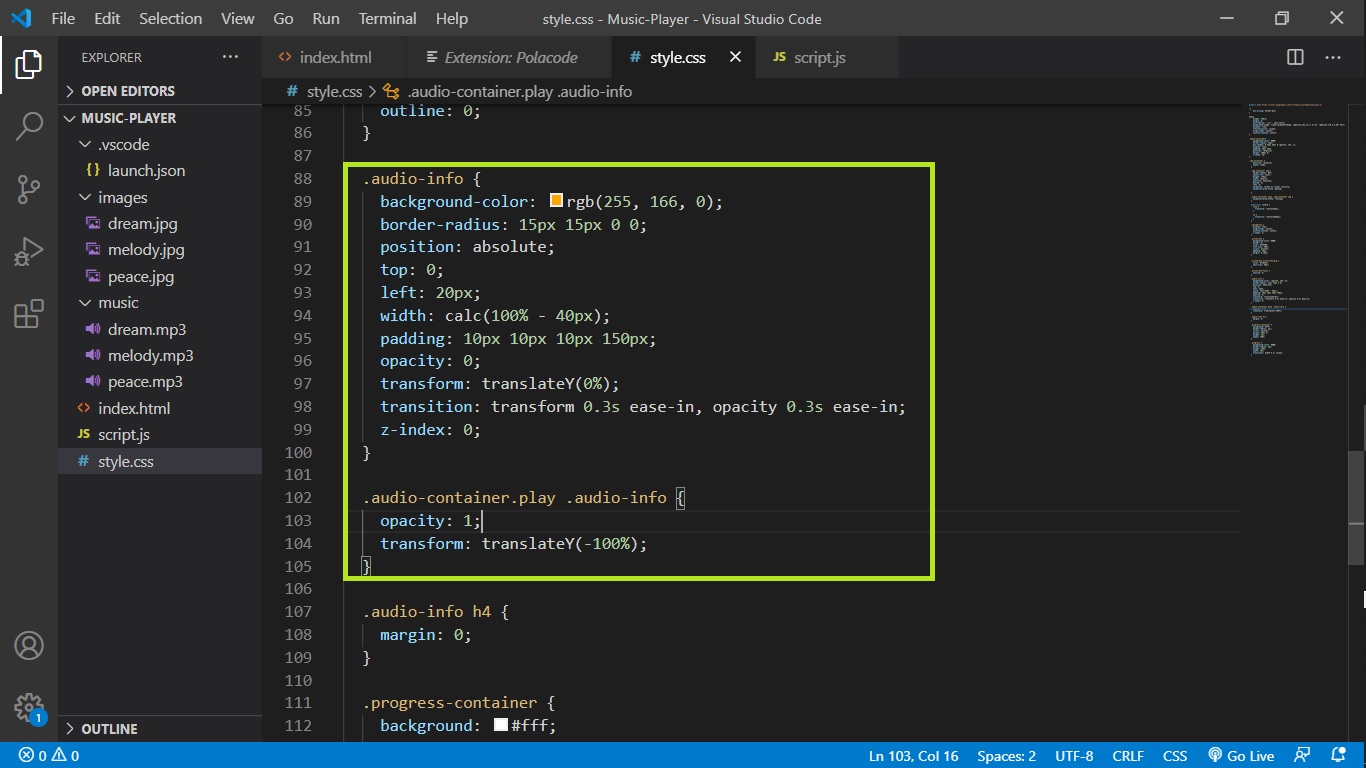 Below is the CSS code for progress bar to show the percentage of song completed. I used white color as background and black color to show the progression. 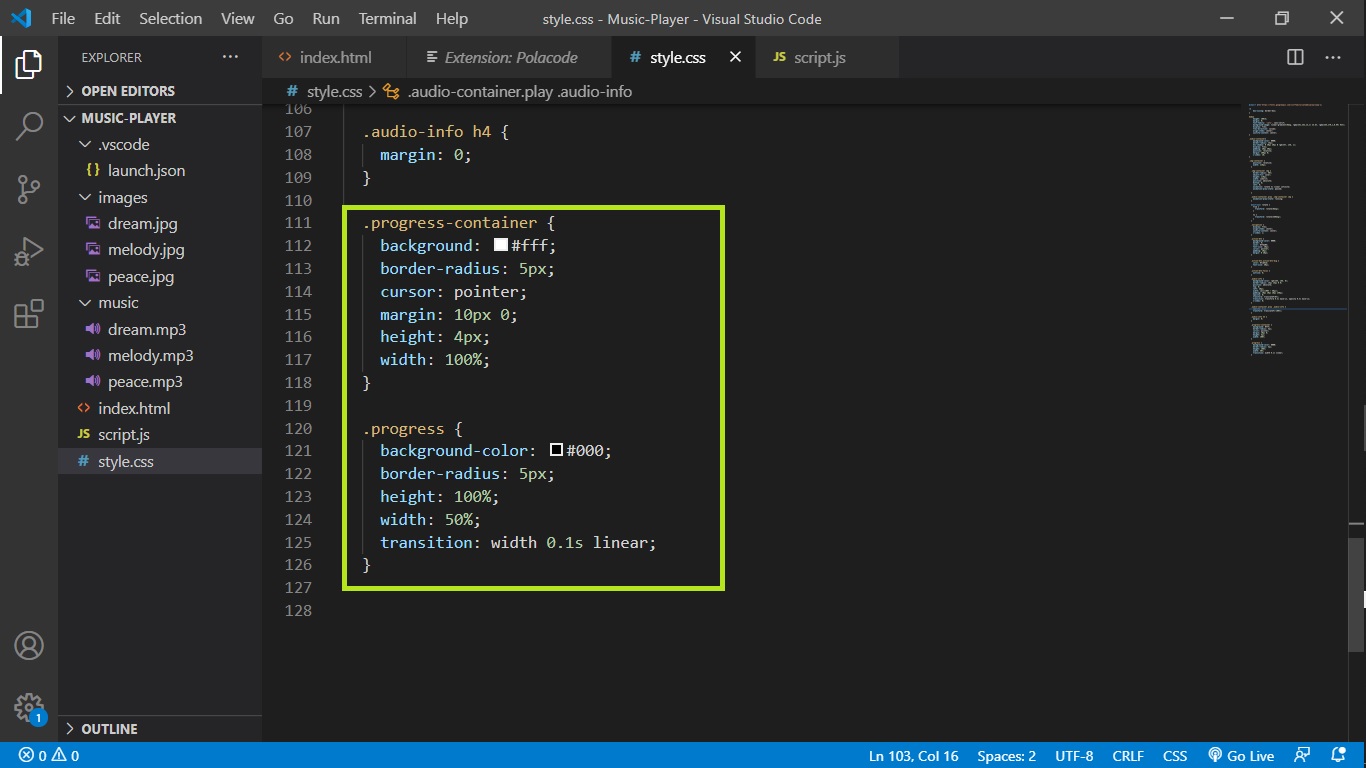 The logic of the player is defined in the script.js file. There are several functions that work together to handle all the functions of the player.
Defining all the variables and accessing the HTML elements.
The required elements in the HTML layout that are to be dynamically changed are first selected using the getElementById() method and then assigned to a variable names so that they could be accessed and modified.

Write a function loadSong(song) to dynamically update the audio source and respective image source. Call the function to load the song details into DOM by passing the songIndex value.I considered songIndex value to be 1 which means music player starts from second song in the list (index starts from 0). 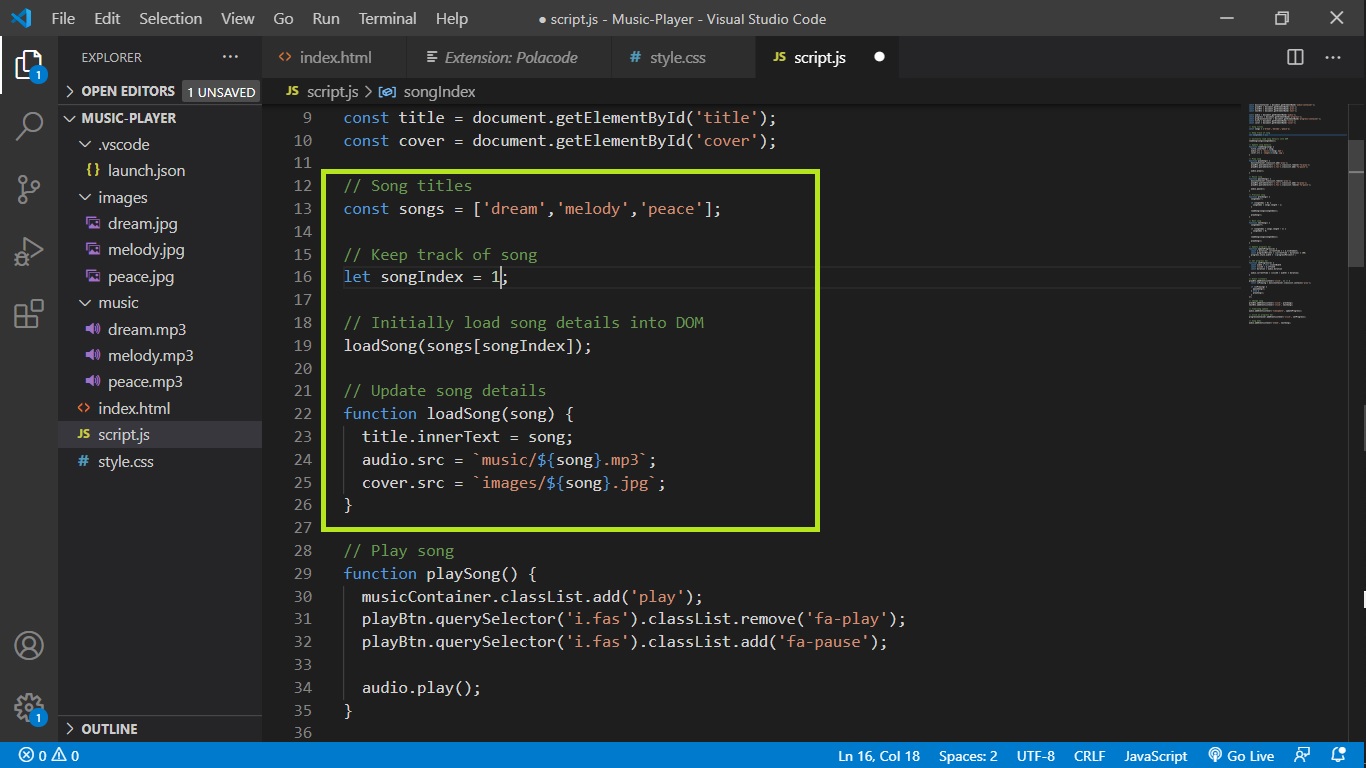 Event listener on clicking Play button: Clicking on play button should start the song and if the song is already playing then it should stop. Implement playSong() function and pauseSong() function which also includes the logic to change the icons from play icon to pause icon and vice versa. 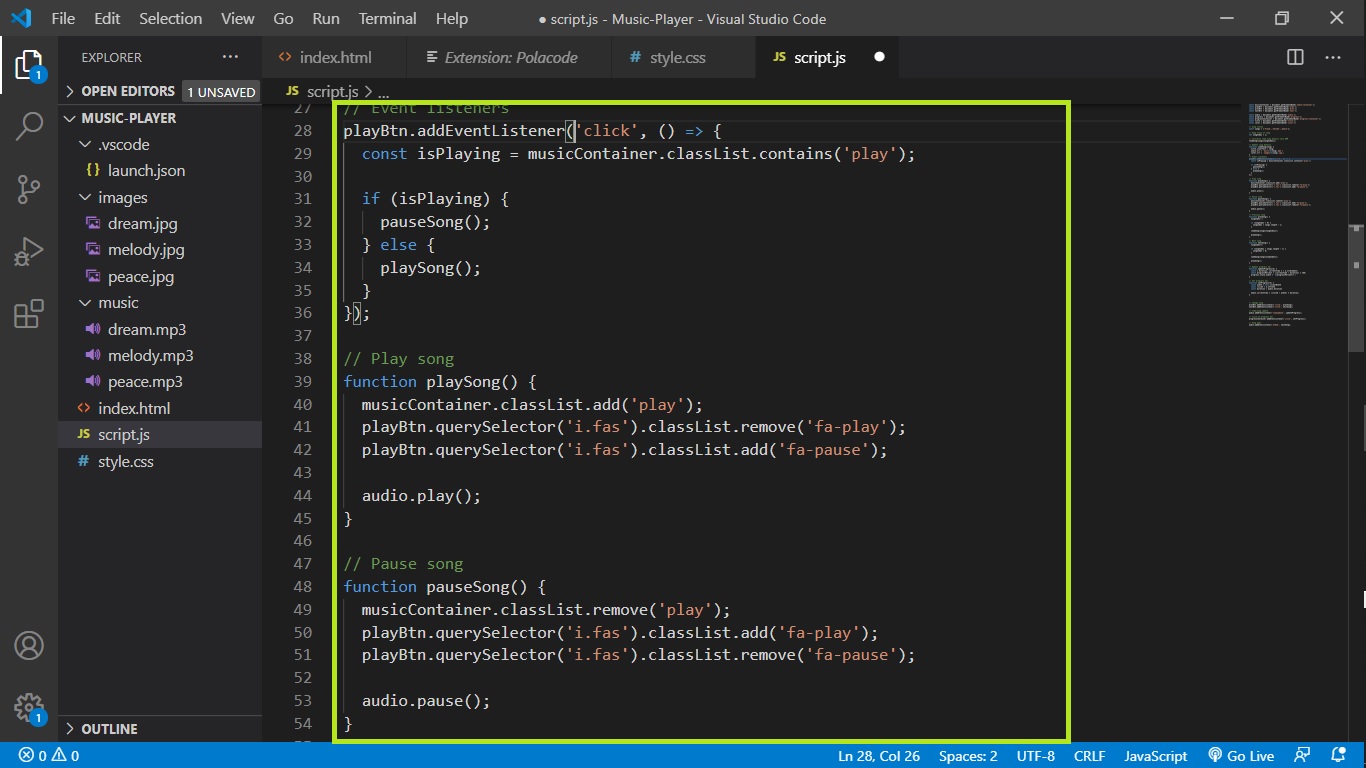 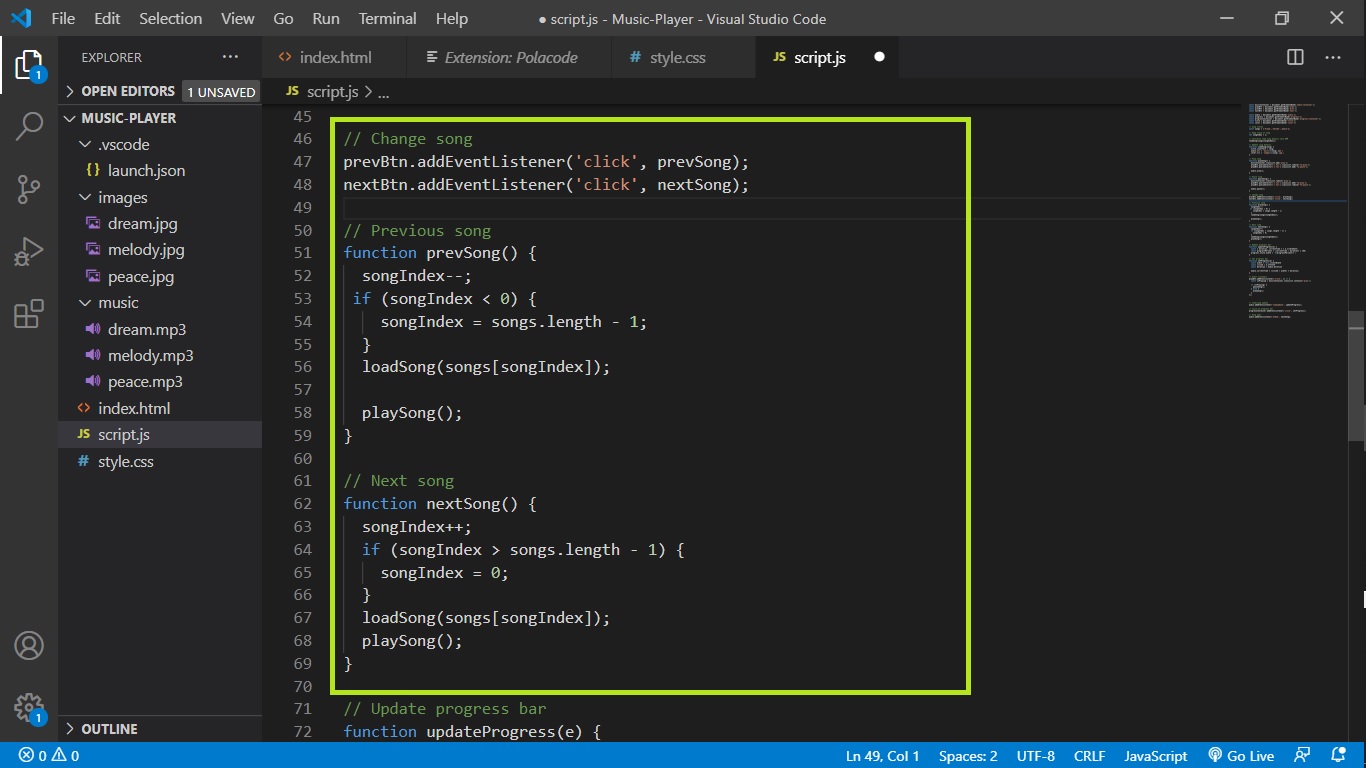 Event listener to update song progress: On HTML audio tag there is an event called timeupdate. Everytime when the song is playing constantly this will be called and on this event we will call updateProgress() function. In the updateProgress() function we will get the duration of the song from the event and the currentTime. Calculate progressPercent by using formula (currentTime/ duration)*100 and set that progressPercent value to width of the progress bar. 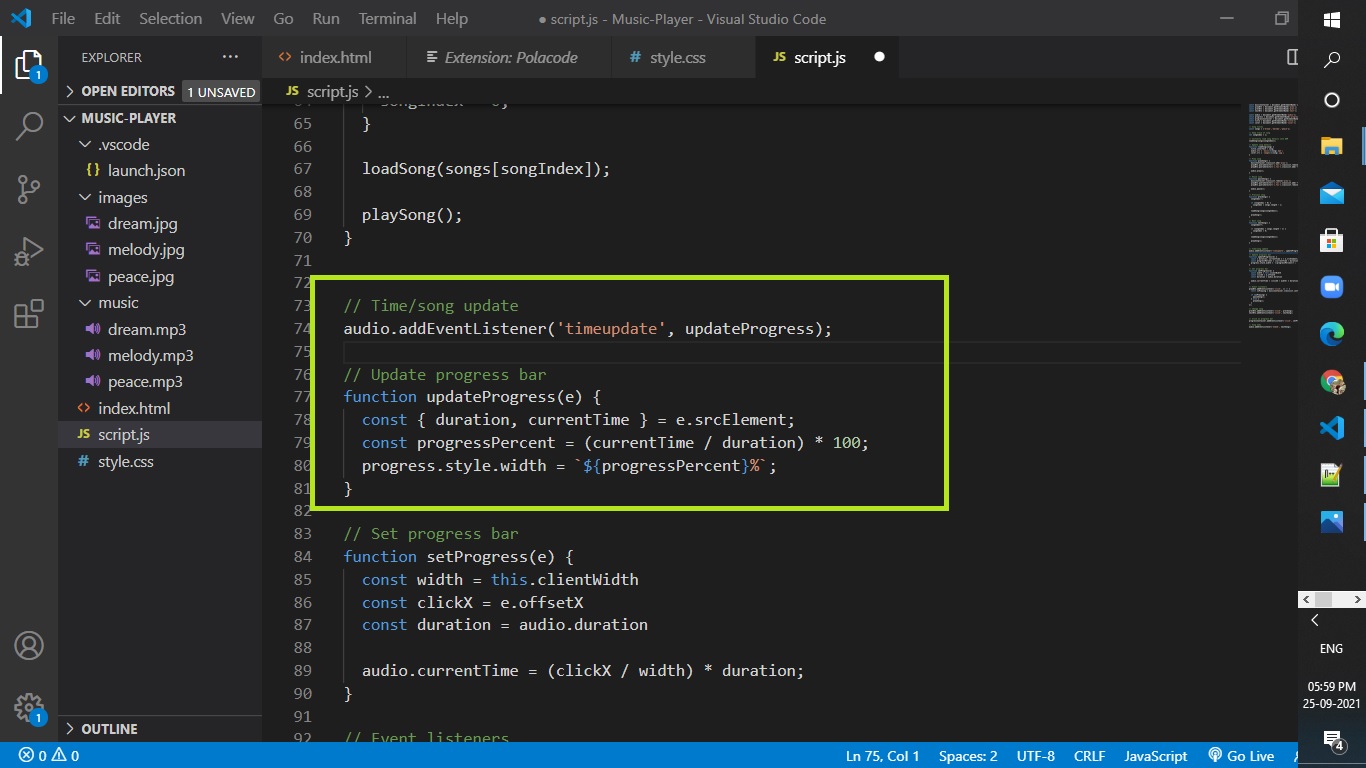 Event listener on clicking progress bar: To go to that spot in the song when we click anywhere on the progress-container then we will call setProgress() function. This function will change the song progression based on user’s click on progress bar by getting the X-axis offset value to know where the user clicked and calculate the currentTime by using formula (clickX / width) * duration. In this way we can move anywhere in the song. 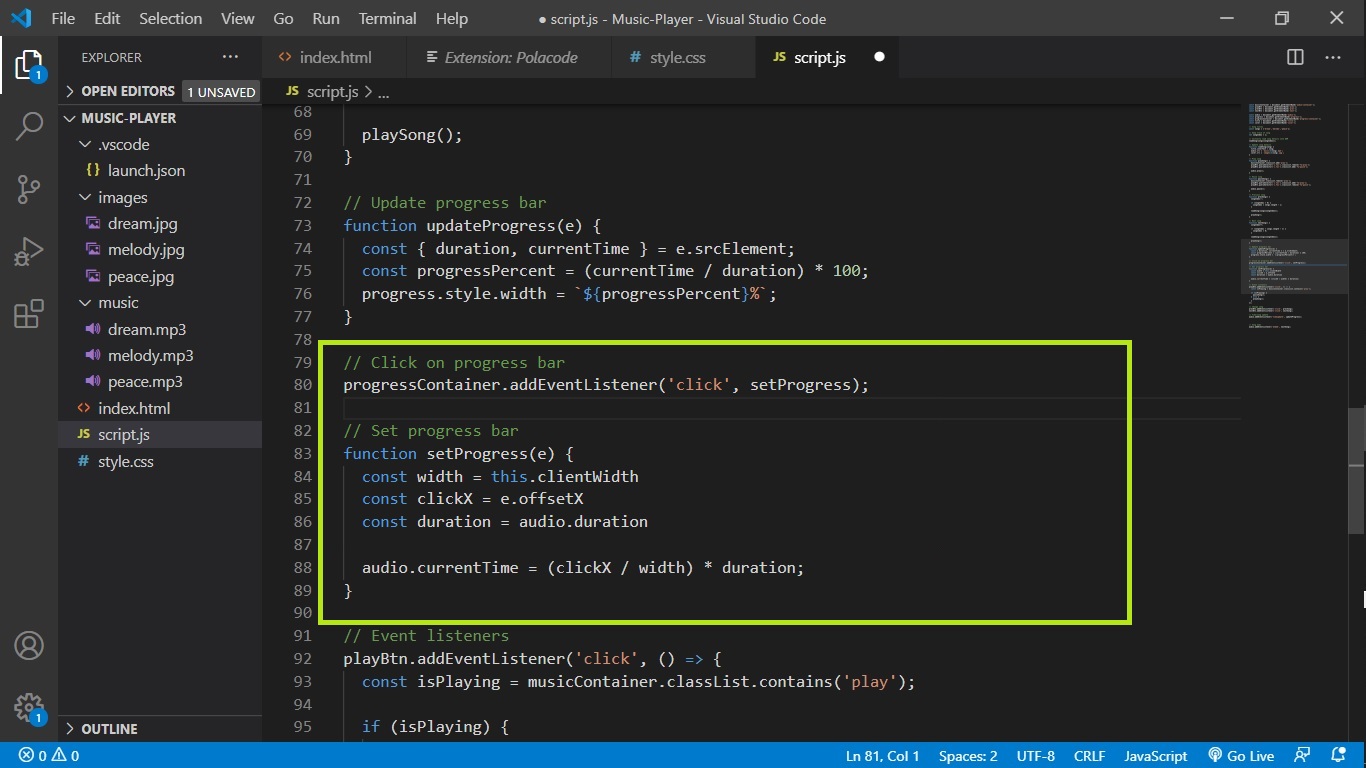 Event listener to check end of the song: The HTML audio API gives us an event called ended. When song ends we will call the nextSong() function which was created before.

VOILA !!!!! Music player is ready for the demo

Complete source code can be found in the Git hub repo, link is here