It’s time to learn JavaScript after my HTML and CSS Crash Courses. JavaScript is everywhere on the web, from sites in Vanilla JS, to modern web-apps created using JavaScript frameworks like React/Angular/Vue. It is also used in server side with NodeJS and also used to create cool desktop app with ElectronJS.

JavaScript is a high level interpreted language, so you don’t need any special compiler to run. The most important use of JavaScript is for browser, as it is the only language available on the Client.

We are going to learn the below topics in this course.

We are going to use the awesome JSbin app in it. So, head over to jsbin.com and open the JavaScript and Console only.

We will first look into console.log(), which is a way to write anything in console and very helpful while debugging. In jsbin we need to click on the run after that and it will show our text in Console. 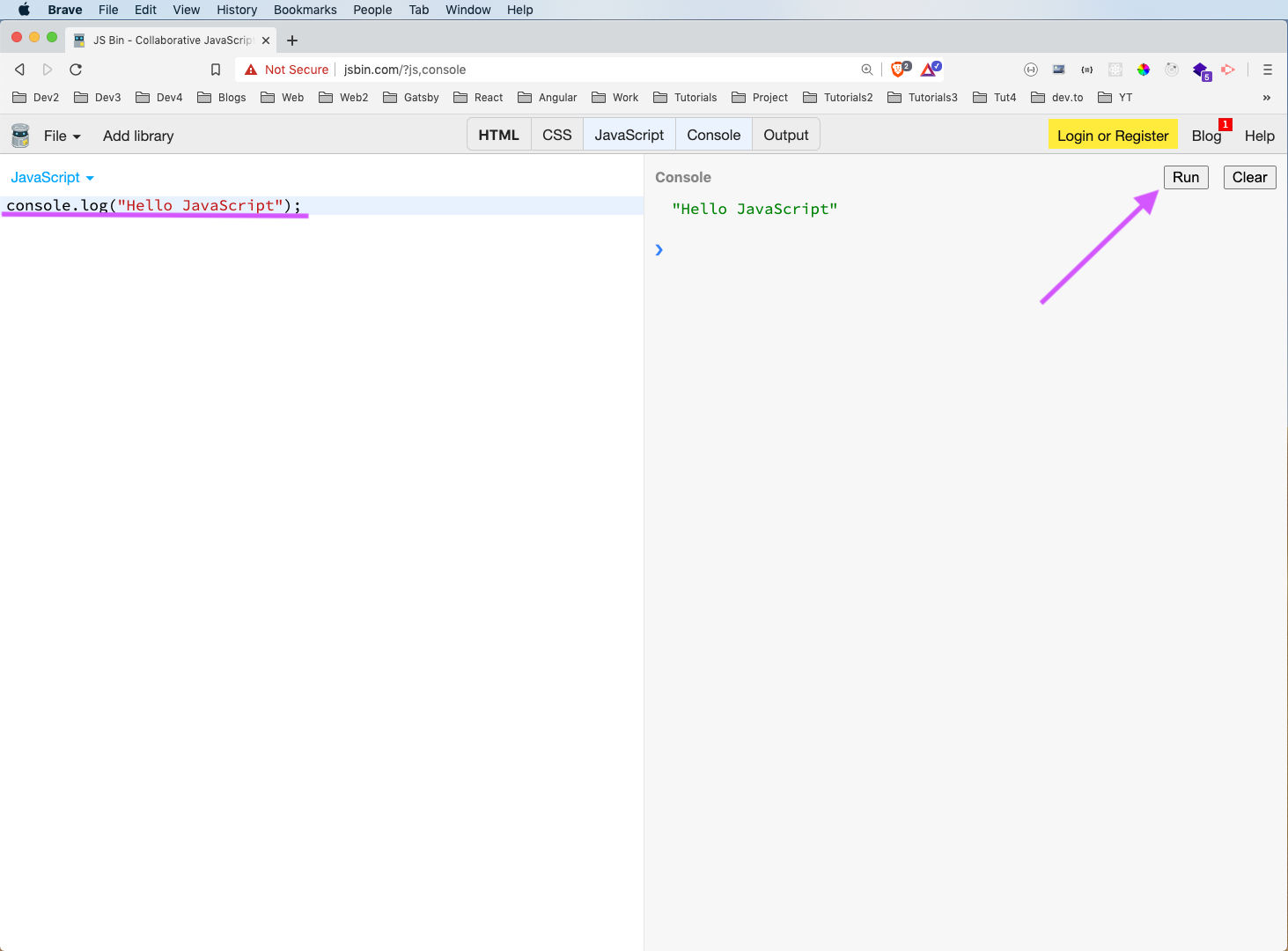 Actually console is the inbuilt object from JavaScript and log is the function. We have other function also in like like error and warn. The complete list can be found from this awesome mdn article.

One more thing is that in all browser by right-clicking and Inspect, we can open the browser console. So, we can get the output in it also. 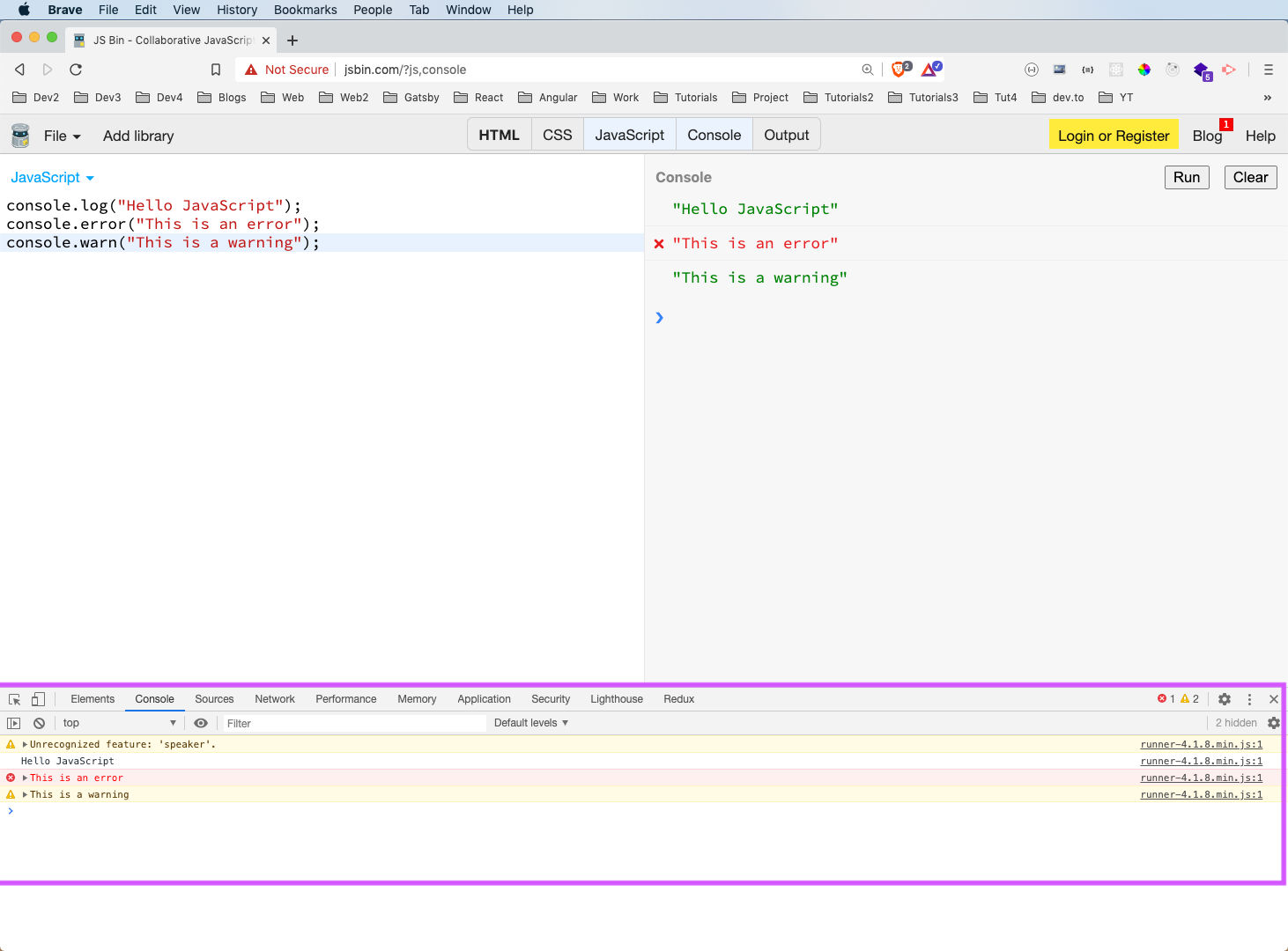 There are three way to declare variables in JavaScript. They are var, let and const.

var is there since the beginning of JavaScript ie 1996, but let and const are recently added in ES6 in 2015.

var have a problem of been functional scoped and not block scoped. To solve this let was introduced.

const stands for constant and we cannot redeclare it. We can add element to Array and Object declared as const, but we will look into them later.

Below is the way we declare variables in JavaScript and with this we cannot see any difference between the three.

Note: To not show anything in console we comment it out by adding two backslashes infront of it, as we did for the three console statements. 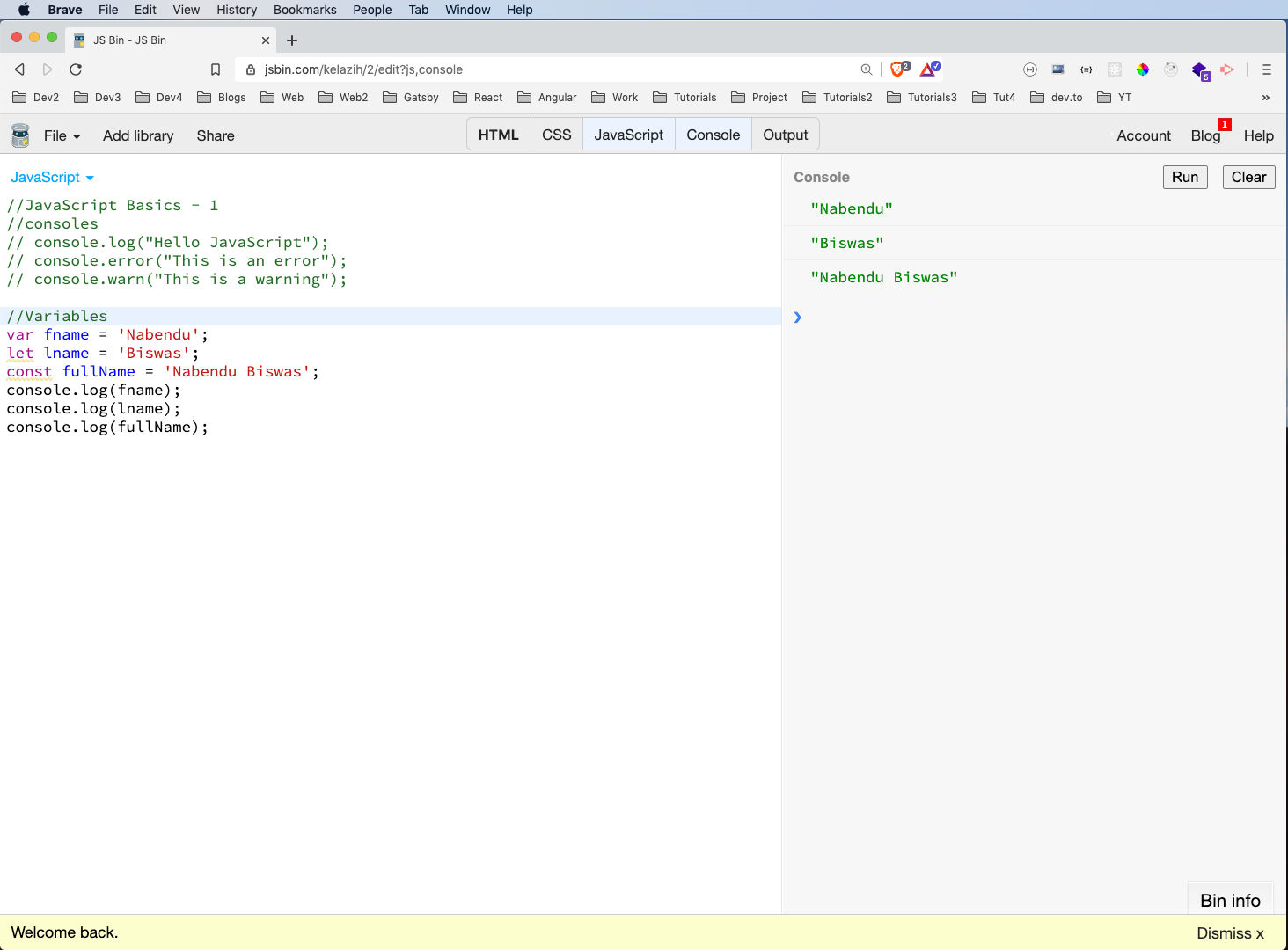 To see the real difference between var and let, we will wrap two declarations inside a if statement(we are soon going to learn about it).

The var value is accessible even outside the if statement, but the let is not accessible and the fourth console.log is giving error. The scope of if is known as block scope. 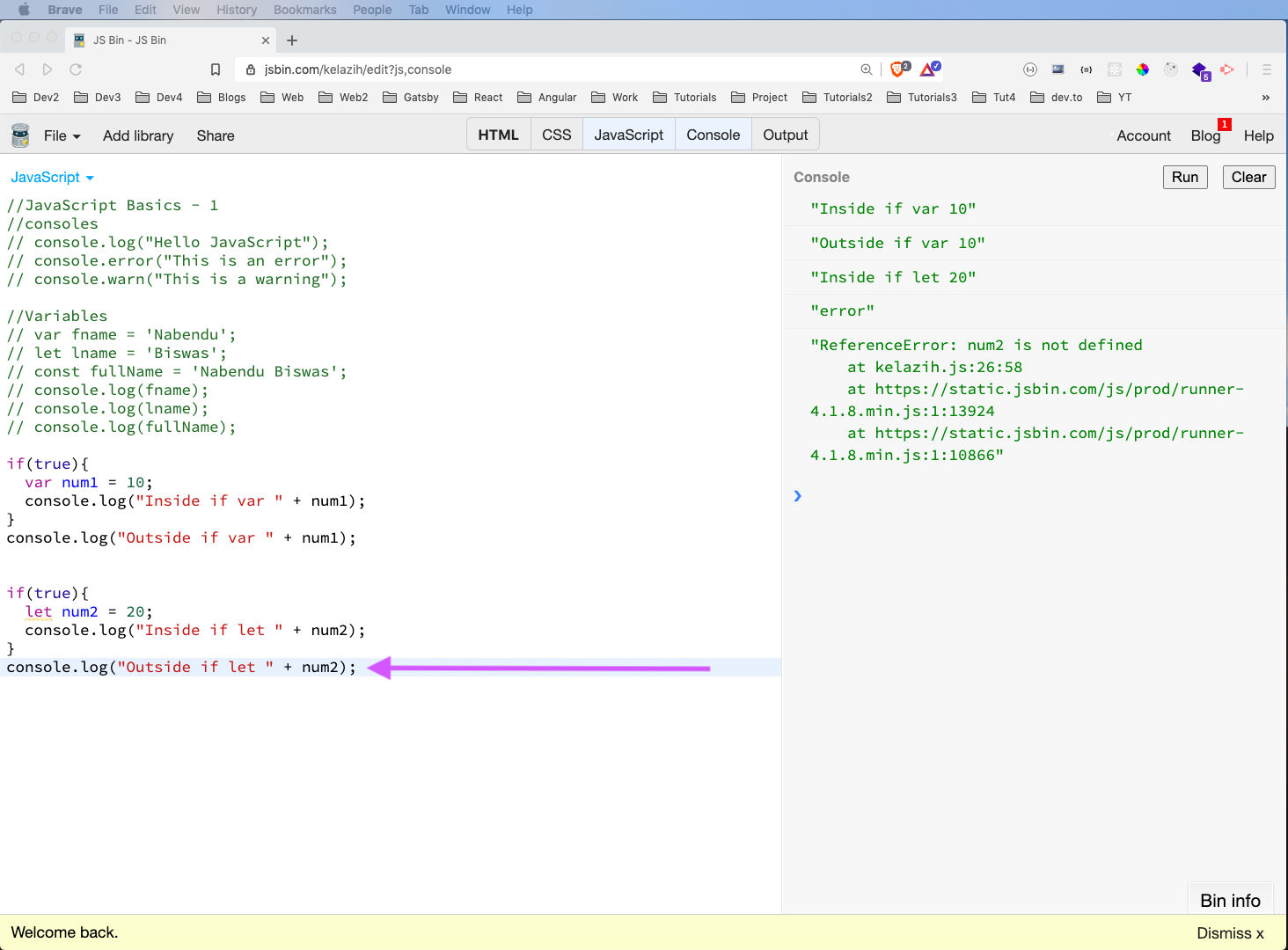 Now, var is functional scope which means it will not be accessible outside a function. We will learn about functions soon. Here, the second console.log is throwing error. 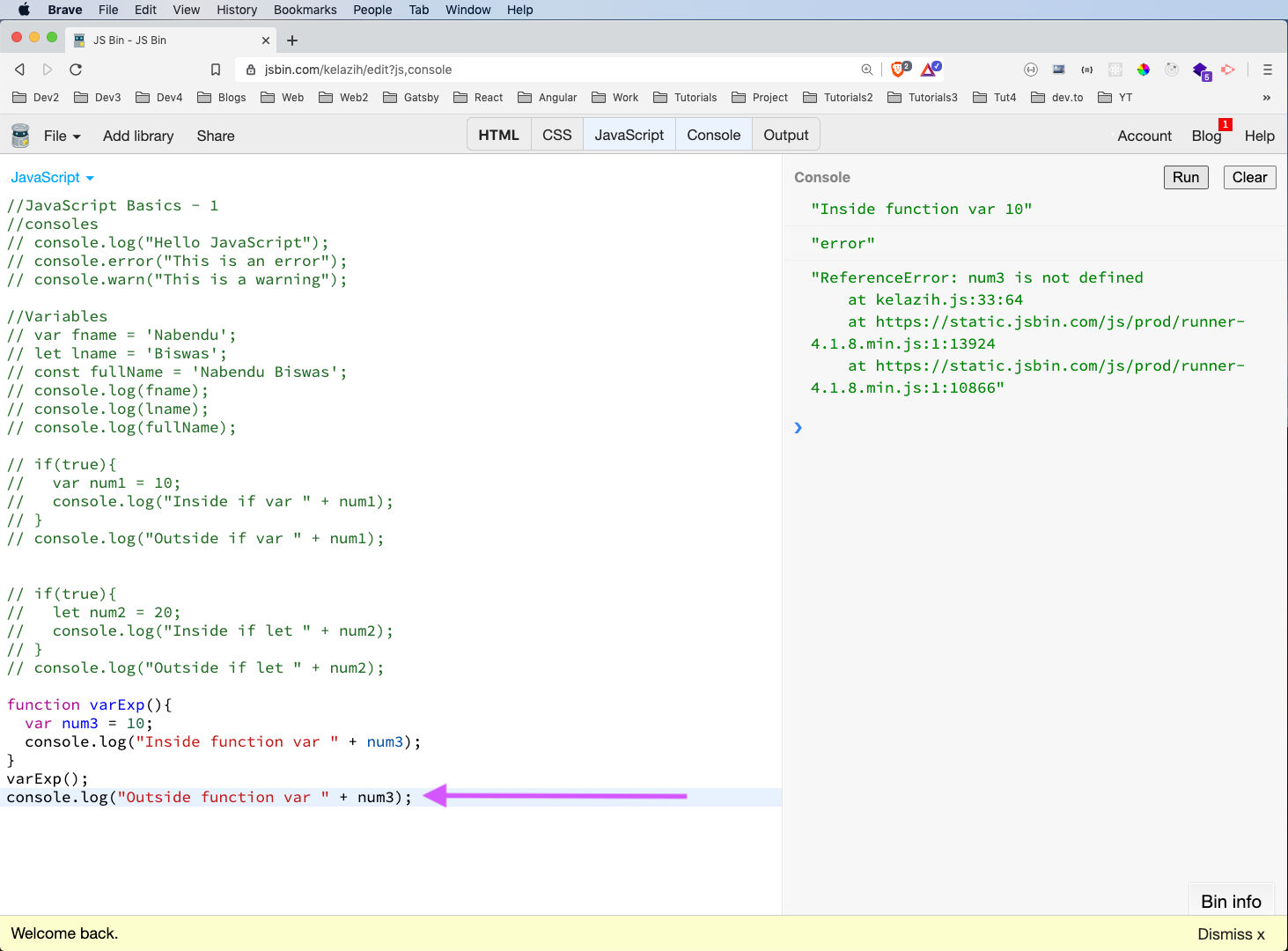 Now, lastly as with const they are not allowed to be assigned values again. So, when we are trying to re-assigning the num4 value it is giving us error. 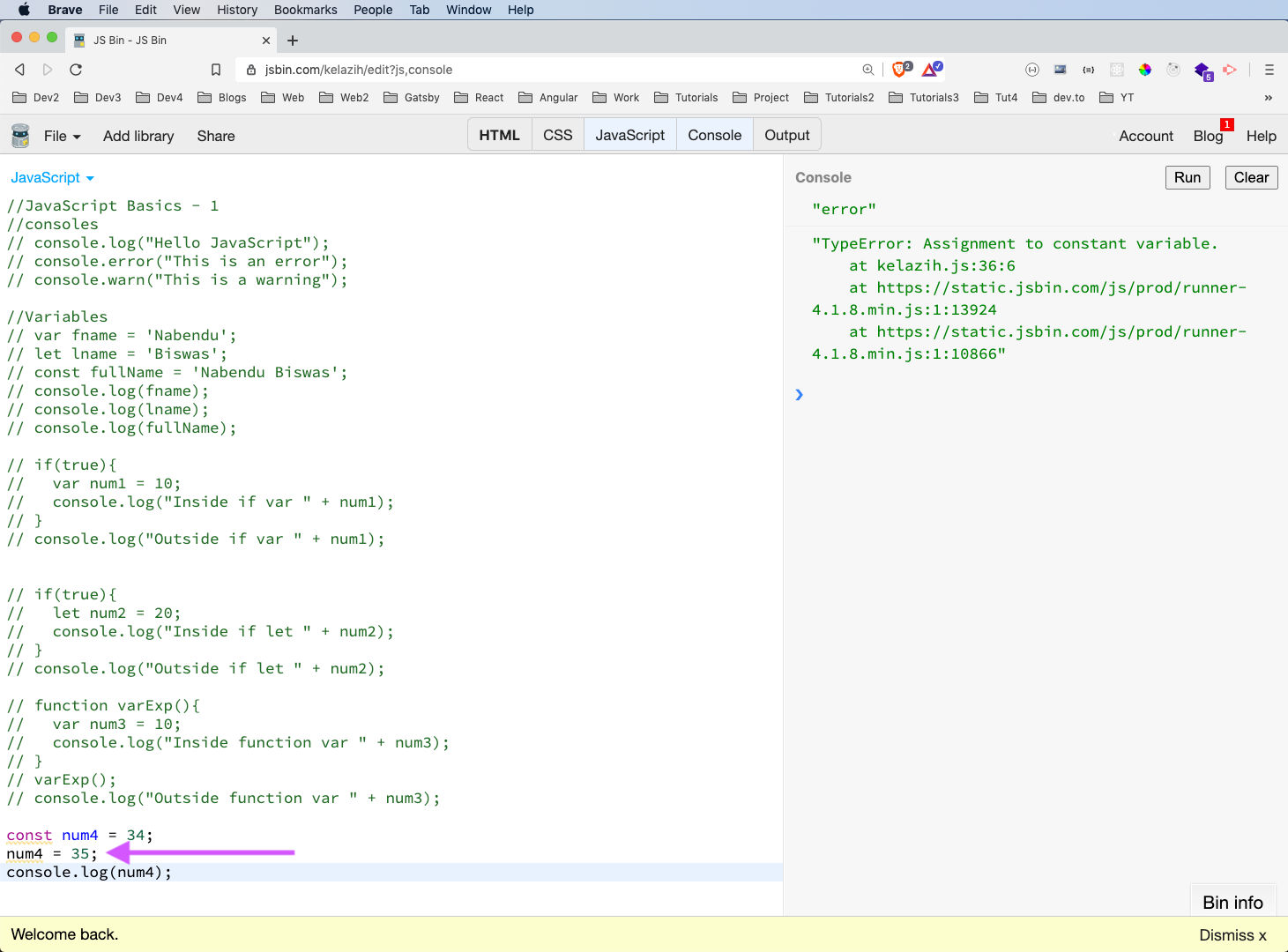 Now, Symbol were added in ES6 and a bit complicated for this course. So, we are not going to look into it and also not used that much.

Now, we had declared seven variables. We are using the typeof operator available in JavaScript to check it’s type. 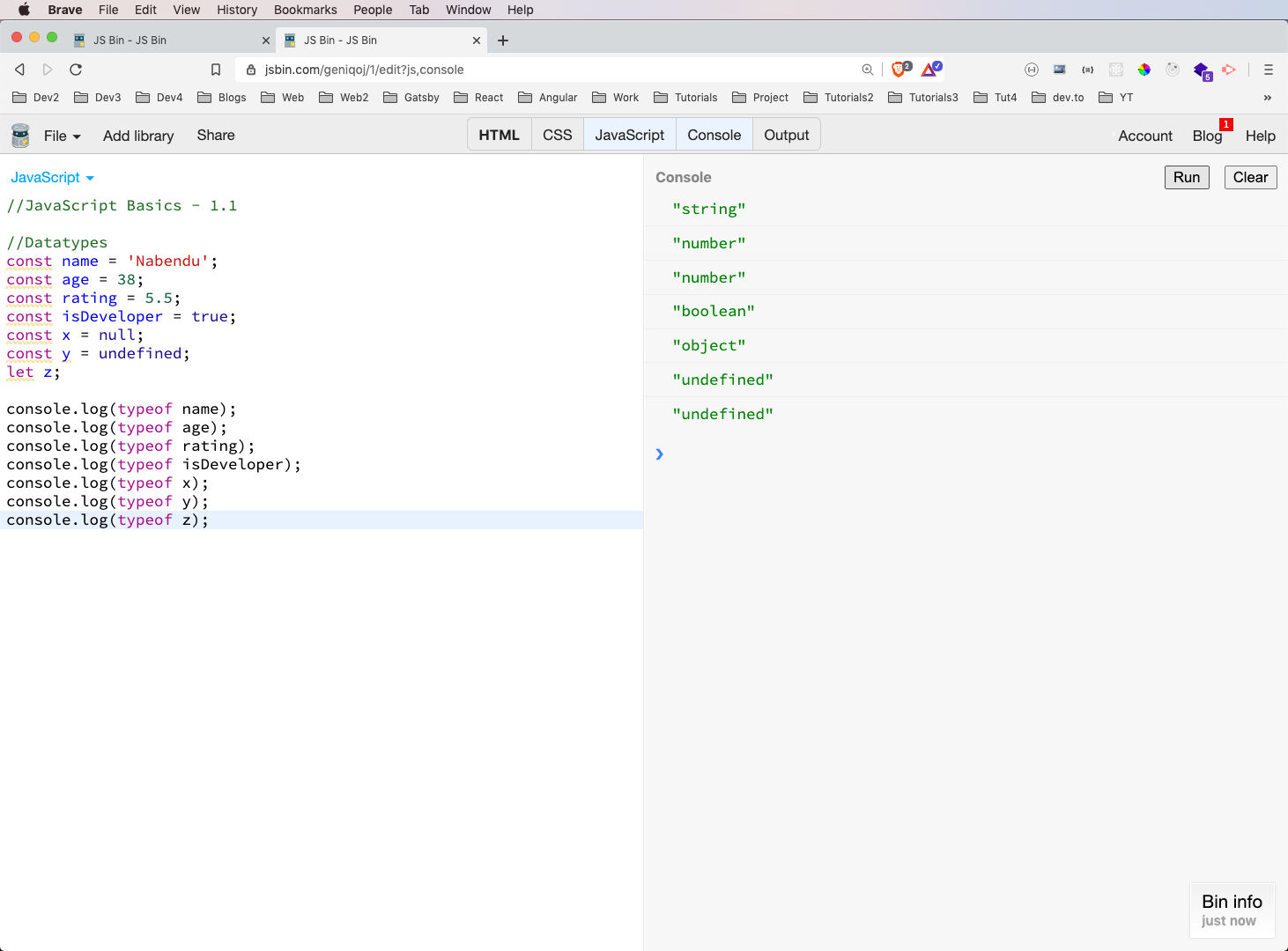 This completes part-1 of the series. You can find the jsbins used in this part below.