Welcome to a brand new series on CSS animation. While creating my earlier series CSS3 in 10 days, i did some animations and got hooked with them. So, decided to create a CSS animation tutorial.

This series is inspired by this awesome youtube series by The Net Ninja.

We will start with learning a bit about CSS animation and then creating some cool animations.

So, go ahead and create an index.html file and put the below code. It is just showing a cloud image.

We will then have a style.css file, which will contain the basic styles.

It will show this nice centered cloud in our webpage, with light blue background.

We will first learn about transform. A 2-dimentional transformation is applied to the element, through the transform property.

It have got many other properties. We will first learn about translate properties. The translateX moves the element on the x-axis.

Add the below in our style.css.

Similarly, a negative unit will move to the left on the x-axis.

Will show as below.

Now, as you might have guessed — The translateY moves the element on the y-axis.

Below is a positive translateY.

And it will move the element down.

Will move the element up, which can also result in image getting cut.

We can move the element in, both x-axis and y-axis by passing two values in translate.

Will result in below.

Moving along x-axis and y-axis

Next, we will look into scale. It basically stretches or shrinks an element.

First, we will look into scaleX which stretches or shrinks an element, along x-axis.

It will stretch 1.5 times along x-axis.

Now, scaleY stretches or shrinks an element, along y-axis.

It will shrink the element 0.5 times along y-axis.

We can also use to scale on both axis by using scale.

It will scale on both axis.

Next, we will look into the transform property of rotate. It rotates the 2-D element, along x, y or z-axis.

We will see rotateX first, which rotates the element along x-axis.

It is sort of difficult to visualize, as the image got smaller. But it actually is rotating along x-axis so, it became smaller to human eyes.

Similarly, rotateY will rotates the element along y-axis.

Now, rotateZ will rotates the element along z-axis.

It is more easy to visualize as it rotate along z-axis.

We can also chain all three transform properties, which we learnt together like below.

It will apply the result of one property on the other. First will rotate, the translate and then scale.

Next, we will learn transition property. Add a new circle to index.html

Also, add some styles for this circle in style.css 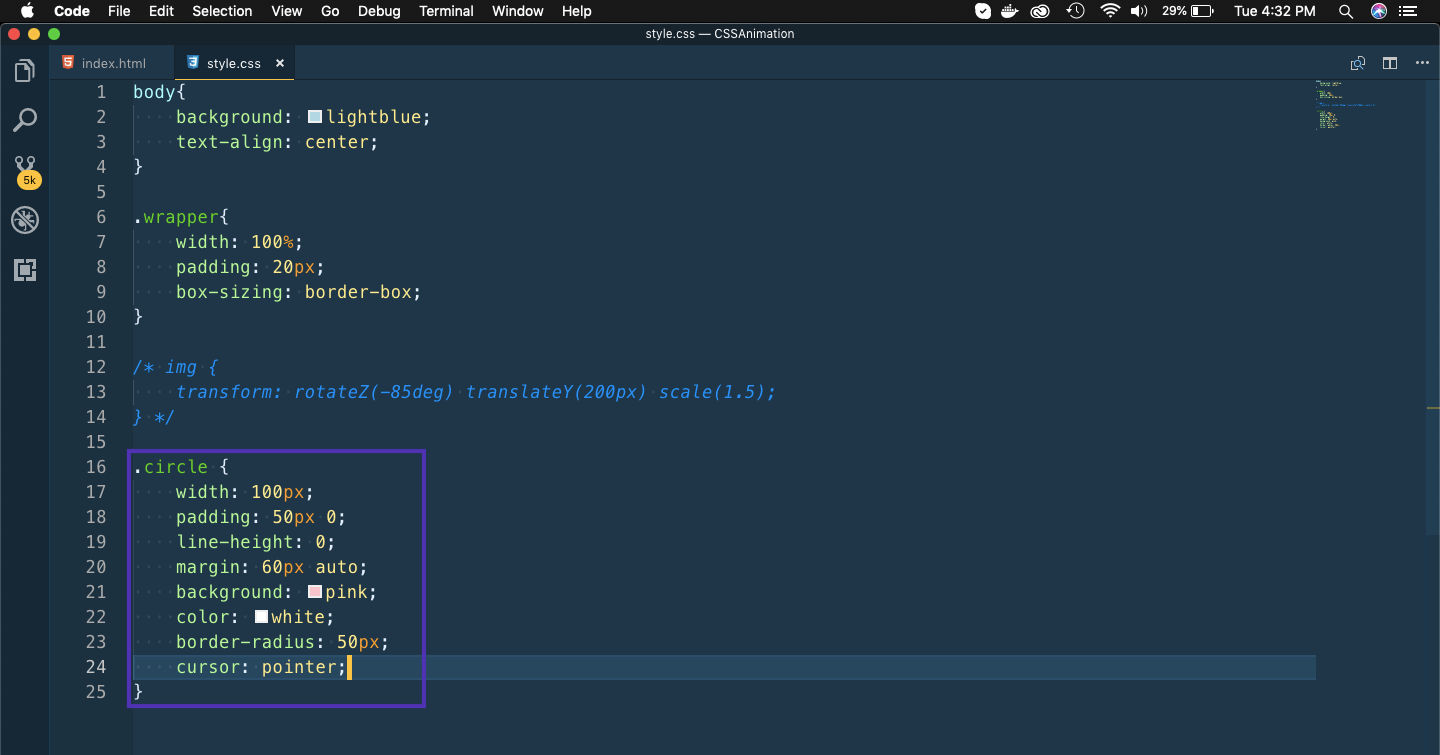 It will show as below in browser.

Now, let add a hover state on the circle.

As we can see from below, only the background changes and the transform doesn’t shows. This happens because the state change happens instantaneously.

Now, if we put a transition of 1 sec in the parent element it will apply all hover state transition, smoothly in 1 sec.

Now, it will change both background color and rotate 360 degrees.

We can also have background and transform, transitions to take different time. We have to add code like below.

Now, the background changes in 1 second but the rotate happens more quickly.

We also have two other properties in transition. They are transition-timing-function and transition-delay.

Now, in the below example transition: 1s ease-in 0.8s; means apply the transition for 1 sec, with function ease-in and after a delay of 0.8 sec.

It will show the transition as below.

You can try them all, but the most used one are linear and ease-in.

This completes the part 1 of the series. You can find the code for the same here.